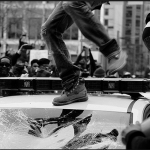 By David Shapiro and Terry Hickey

From the Baltimore Sun

When Trayvon Martin’s life was taken our nation was forced into a long overdue conversation about the condition of the lives of African-American boys and young men. Young men like Michael Brown in Ferguson, Mo.; John Crawford in Beavercreek, Ohio; and now Freddie Gray in Baltimore. This avoidable loss of life leaves eternal scars on families, communities and the entire country. The post-tragedy narrative is frustratingly predictable. The death of a young black man. Crowds linking arms to demand justice. Long escalating tension between police and community playing out. Yet, as we hope for personal healing, the elevation of these tragedies into public consciousness also becomes a symbol for so much more.

In Baltimore, a city with historically segregated housing, deep cycles of generational poverty, and a challenged public school system, people are united for all to see: 300 men marched and called for peace in the midst of the most chaotic night of unrest. Congressman Elijah Cummings and other elected officials wrapped their arms around young people with a message to be safe. NBA player and Baltimore native Will Barton announced a town hall at a local basketball court and asked pastors and nonprofits to invite young people. When the public schools closed, people lined up to serve lunches, organized through #BaltimoreLunch on Twitter, to some of the 70,000 students who qualify for free or reduced meals.

The broader community is showing up for young people and for each other in a magnitude and manner that has not been celebrated enough as a solution to national challenges. We must grip this energy tightly and sustain it.   When a Baltimore pastor was asked what he would tell young people who feel plagued by hopelessness, he said, “I wouldn’t tell them anything. I’d listen first.” Are we truly listening to young people? They not only want justice for Freddie, Michael and Trayvon. They want justice for themselves and deliverance on the promise that every young person in America will have the support and opportunity to realize a bright future.

In youth mentoring, we often warn against society’s auto-response to show up for children only in crisis or triumph. The real work happens in the moments in between. But there are signs of hope in Baltimore, of a longer-term commitment from individuals. In just 36 hours, the Maryland Mentoring Resource Center operated by Big Brothers Big Sisters of Greater Chesapeake saw a 3,000 percent increase in the number of volunteers seeking to become mentors. Baltimore has innovative and ground-breaking mentoring organizations like My Sister’s Circle and Thread and many others to ensure that this story will be about what happens when we connect and invest in each other long-term.

What these prospective volunteers realize is that young people, particularly those living in poverty, believe they are alone. They are living in social and economic isolation without a sense of belonging and disconnected from the opportunity to do better. They don’t believe they matter.

The reality, however, is that even if we reversed the scene of an empty Camden Yards by filling it with new mentors — and that in and of itself would be a powerful statement — our youth also need society at-large to show them they matter.

Current investments in young people indicates otherwise. The average annual state spending on one person in prison is more than double the national average for educating one student. More than 11 million school-age children are on their own after school. Federal funding for youth employment programs peaked more than 40 years ago in 1979. In today’s economy, there are far fewer pathways to opportunity and economic mobility. In the pursuit of both social justice and prosperity, the public, private and non-profit sectors must more fully invest in youth, especially those facing the steepest challenges. It will require focus, ingenuity and innovation to build new pathways to reverse mounting inequality.

The tragic events at the core of the stories in Ferguson, Beavercreek and now Baltimore are beyond just personal. They impact entire communities. They speak to systemic failures. And while the solutions must be personal and driven by community, they must be supported by a democracy truly willing to deliver on its promise.

Empowering Our Young People, and Stemming the Collateral Damage of Incarceration