But below the surface, the data reveal some alarming trends about how athletic participation is distributed town by town and city by city. While youth in high-income school districts are playing as many sports as ever, students in low-income communities are far less likely to participate in school athletics at all.

“Fifty years ago,” Putnam writes in his book, “offering opportunities for all kids to take part in extracurricular activities was recognized as an important part of a public school’s responsibilities to its students, their parents, and the wider community. No one talked then about soft skills, but voters and school administrators understood that football, chorus, and the debate club taught valuable lessons that should be open to all kids, regardless of their family background.” 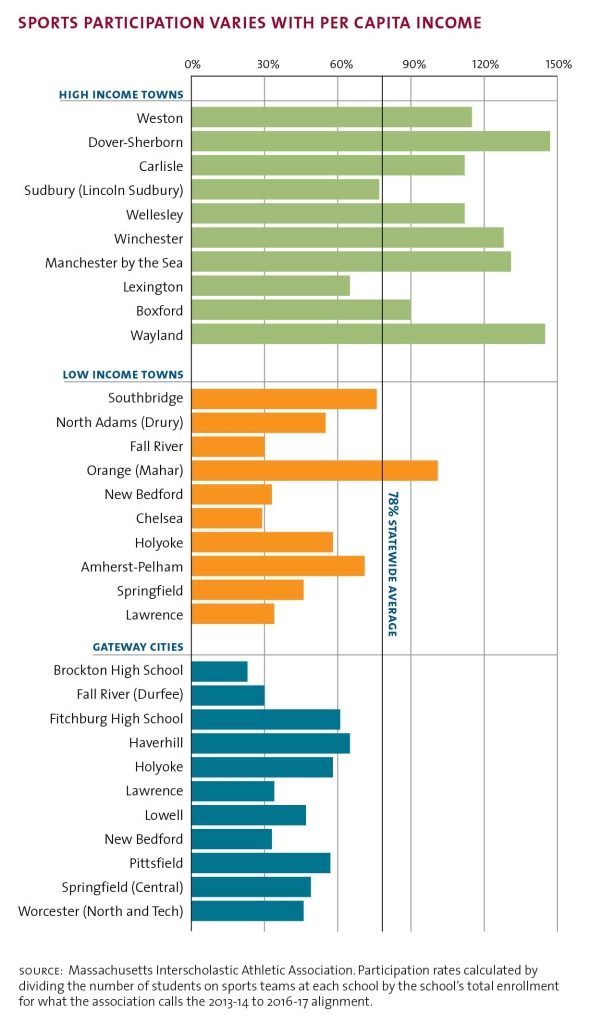 The MIAA’s athletic participation data is less than ideal but still revealing. The association collects from 376 schools across the state the number of students participating in each sport, but doesn’t account for students playing multiple sports. So the data don’t tell how many students actually played sports, only how many sports seasons were completed by students. Still, by tracking the number of seasons completed — one completed season is counted for each athlete in a sport — the MIAA provides a useful tool to analyze the level of physical activity and sports involvement at high schools around the state.

The average sports participation rate statewide during the 2014-15 school year was 78 percent for all 376 schools, meaning there were an average of 78 sport seasons completed for every 100 students. Examining the sports participation data through the lens of a community’s per capita income yields interesting patterns.

Six communities with per capita incomes that rank halfway between the state’s high and low extremes had a collective sports participation rate of 82 percent, four points higher than the statewide average. Within the group, however, there was wide variation, ranging from a low of 53 percent in Weymouth to a high of 147 percent in East Bridgewater.

The state’s 10 poorest communities had an overall sports participation rate of 44 percent. Only one of the 10, the Ralph Mahar Regional High School in Orange, topped 100 percent. None of the others cracked 80 percent; Chelsea High School was the lowest at 29 percent.

In most of the Gateway Cities, participation has barely grown at all since 2010. In Brockton and Lowell, the average number of sport seasons completed has actually declined over the past five years.

Municipal funding plays a key role in the level of participation in sports and other extracurriculars. Many communities, faced with budget deficits, have cut funding for sports or started charging fees to play sports, both of which reduce participation. Brockton, which has a low sports participation rate, pared back its sports spending during the 2014-2015 school year to deal with a $5.7 million deficit. Marlborough last year eliminated freshman sports to deal with a budget shortfall. Nationally, some reports have suggested that 40 percent of public schools impose fees on students who participate in sports.

But educators say poverty is the real cause of declining sports participation in many communities. In wealthy towns, sports are an important part of community life. Parents sign their children up for sports leagues at very early ages and often take time off from work to coach. Businesses sponsor leagues and teams. As children get older, parents sign their children up for summer travel teams or special AAU teams. It’s not uncommon for children to play their favorite sport year-round.

At high schools in wealthy communities, most sports have freshman, junior varsity, and varsity squads. Competition for varsity positions can be intense, with parents often grumbling about lack of playing time. Many parents see sports success as a key asset as their children apply to colleges.

The situation is very different in poorer communities. Parents in these communities often don’t have the money or the time for sports.  Ray Cosenza, the athletic director at Fitchburg High School, recalls a time when the city had three youth baseball leagues, each with at least six teams. Now, he says, there is one league with a handful of teams. The lack of a feeder system may explain why the high school’s varsity baseball program had some problems fielding a team two years ago, even though the school has 1,250 students.

Football and basketball still attract large numbers of participants in poorer communities, but other sports don’t fare as well. Most schools have varsity teams, but junior varsity and freshman squads are less common. There just aren’t enough athletes, and those students that do try out for teams often have a lot of catching up to do in learning about the sports.

“A lot of kids we deal with come to high school and have never played a sport before,” says Brad Schoonmaker, director of athletics programming for Boston Scholar Athletes, which supports athletes in the Boston Public Schools.

Six years ago, Andre Ravenelle saw sports participation at Fitchburg High School slipping. The band’s numbers were also down. Looking around the community, says the longtime superintendent of the city’s school system, it was clear that parents were struggling to make ends meet and lacking the resources to send their kids off to play on sports teams or take music lessons.

“I realized that if kids were going to learn to play sports, they were only going to learn it from us in school,” says Ravenelle. “If we didn’t do it, it wasn’t going to happen.”

The cross country teams of Fitchburg High School and Wachusetts Regional High School line up for the start of a race. Photo by Meghan Moore.

So Ravenelle launched sports in middle school at a cost of $70,000 a year. At the high school, he waives the $50-per-sport fee for 70 percent of the school’s athletes. He is also expanding art and music offerings, while pushing more rigorous academic programs and standards. “These are not individual initiatives,” he says of the academic and extracurricular programs. “These are parallel initiatives.”

Ravenelle, who has a son who pitches for a Detroit Tigers minor league team, says playing a sport is about more than just exercise. He says sports boost a school’s morale, encourage civic pride, and teach students all sorts of skills they need in life. Sports also expose students to coaches who can become mentors, says Ravenelle, who is the president of the Massachusetts Association of School Superintendents.

“There are so few areas for our kids to work as a team, learn leadership, and have role models,” he says. “For a lot of our kids, sports is where they’re going to succeed.”

Officials at other schools and foundations are also pitching in. Boston Scholar Athletes, founded by Suffolk Construction chief John Fish, raises money to provide tutors and other academic supports to help student athletes in Boston and Springfield maintain their academic eligibility.

“There’s a lot of talented athletes who can’t get on the course because they don’t have the grades,” says Schoonmaker of Boston Scholar Athletes.

Marquis Taylor, co-founder of Boston-based Coaching4Change, is using sports in a different way to help high school students. His program targets high school students interested in sports but who aren’t playing on a team. They receive mentoring help on organization skills and then use those skills to coach teams at the elementary and middle school level.

By challenging high school students to lead a team of kids, and do the organizational work behind it, Taylor’s organization has had success in improving the grades of participants. In Brockton, 80 percent of students participating in the program improved their grade-point average by at least a  half a point on a 4-point scale during their time with C4C, Taylor says.

Jeff Riley, who became receiver of the Lawrence public schools three years ago, says his primary focus is on improving the quality of education. But he says sports and other extracurricular activities are a key part of that effort. “I can tell you anecdotally that kids need to have these kinds of opportunities,” he says. “Sports are a huge part of a child’s development.”

Riley launched sports intramural programs at the middle school level when he took over and is taking advantage of an expanded school day to send elementary school students to learn to swim at the YMCA and get exercise at the Boys and Girls Clubs. He is also exploring whether the Play Ball foundation, which funds middle school sports programs in Boston, could do similar work in Lawrence.