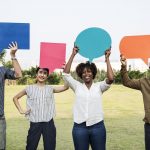 Saying something like “girls are as good as boys at math” might come with good intentions and the intent to encourage, but it can backfire, according to new paper.

Although well-meaning, the statement, which parents and teachers often express, can subtly perpetuate the stereotypes they are trying to debunk, study coauthors Eleanor Chestnut and Ellen Markman say.

On the surface, the sentence tries to convey that both sexes are equal in their abilities. But because of its grammatical structure, it implies that being good at math is more common or natural for boys than girls, the researchers say.

Markman and Chestnut tested the effects of the sentence, as well as variations like swapping “girls” with “boys,” on a group of English-speaking adults. They found that most people associate a natural math ability with the gender written in the second part of the sentence—what grammatically is known as the complement.

“Considering that several fields with large gender gaps like computer science and physics value raw talent, statements that imply that boys are naturally more talented could be contributing to women’s underrepresentation,” says Chestnut, the lead author of the paper that formed part of her doctoral dissertation work at Stanford University.

“Adults, especially parents and teachers, should thus try to avoid consistently framing one gender as the standard for the other,” she says.

The difference between “girls are as good as boys at math” and “girls and boys are equally good at math” may not be obvious, but each carries a slightly different meaning.

The first statement contains a so-called subject-complement structure, which compares girls to boys. “Boys” is the complement or a standard against which “girls,” the subject, is examined.

In other contexts, English speakers use this structure to compare one object to another that’s considered more typical or common. That’s why it sounds better to say “tents are like houses” instead of “houses are like tents,” or “zebras are like horses,” not “horses are like zebras.”

The second sentence has a subject-subject structure and puts both girls and boys in the same position in the sentence, without comparing the two.

Markman and Chestnut surveyed 650 English-speaking adults from the United States to better understand how people perceive the subtle difference between such statements even if they do not realize it.

“Language can play a huge role in how we perceive the world,” says Chestnut, who is now a postdoctoral scholar at New York University. “It’s important to identify parts of language that taken all together can influence us in one way or another, unknowingly.”

The researchers divided study participants into five conditions, each with 128 people.

Participants read variations of a paragraph that summarized research that showed a lack of gender differences in math skills. The text for each condition was almost identical except for a subtle difference in how the main finding was framed. Participants read text with one of four statements: “girls do just as well as boys at math,” “boys do just as well as girls at math,” “girls and boys are equally good at math,” and “boys and girls are equally good at math.”

After reading the text, researchers asked participants in all conditions which gender they considered to be more naturally skilled at math.

“We thought that swapping ‘boys’ and ‘girls’ in the sentence would have an effect, but we didn’t expect a full reversal of the stereotype,” says Markman, professor and senior associate dean for the social sciences in the School of Humanities and Sciences at Stanford University.

When the researchers explicitly asked participants if they thought the sentence “girls are as good as boys at math” was biased in any way, people rated the statement as unbiased. This shows that the power of such statements to imply inequality occurs without listeners realizing it, the researchers says.

Chestnut and Markman encourage people to pay attention to how they talk when they describe gender. They suggest choosing subject-subject structures and avoiding subject-complement sentences that frame one gender as the standard.

Chestnut hopes to research further how much text in the media and other public discussions, online and offline, uses subject-complement sentences that frame men as the standard that women are compared against. Chestnut and Markman are also currently working on studying how such differences in framing affect children and whether subject-complement statements of equality teach children stereotypes about gender.

“We are not saying, ‘Never say this or that,’” Chestnut says. “But if this type of language is everywhere and if we’re habitually using it, it all could matter. … [W]e should critically analyze our language so that we can identify and then correct the ways we implicitly reinforce the belief that men are the dominant, higher-status gender.”

“Sticks and stones,” is the beginning of a phrase with which many of us are familiar. Whether we heard it during our childhoods or have said it ourselves to young children, the phrase seeks to reduce the impact that words can have on the way we feel. As this study points out, however, words can even go so far as to undermine our best intentions.

For mentors and programs, this research serves as a good reminder that phrasing does, in fact, have an impact on how we assess the strengths and challenges facing the youth with whom we work, even when we do not realize it ourselves. Programs have an opportunity to review their training protocols and determine ways in which they may be using one gender as the standard. That could include recommendations on activities to mentors that use phrasing such as “Girls like sports just as much as boys.”

For mentors, when it comes to supporting your young mentoring partner you may be seeking to encourage them by using phrases like the ones described in this research. It is impractical to try and analyze every word you use in such interactions, but it can be an area of growth as a mentor to reflect upon the way you engage with your mentoring partner and how your use of language may be impacting them. Words carry a great amount of weight for young people, especially when it comes from a trusted, close source such as a mentor.

With the important caveat that this was not addressed in the present research specifically, it is possible that this effect extends beyond the gender divide. For example, concepts like stereotype threat disproportionately impact marginalized populations in the United States, and may interact with the findings in this study to impact the way young African American boys may perceive their overall academic ability and whether they decide that school “just isn’t for them.”

More research must be done in order to determine the way these findings may interact with other interpersonal and cultural norms before firm conclusions can be drawn, but this may be a fruitful area of research moving forward.