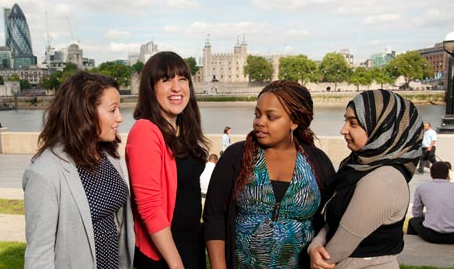 Educated in a run-down part of Portsmouth, Becca Dean thought little would surprise her about teaching at an inner-city girls’ school. But taking a group of pupils from north London into the capital by Tube proved to be an eye-opener. “These were 15-year-olds and they were going ‘Miss, I’m scared. Can I hold your hand?’ I’ve never been to London. All I know is our our end [north of the city].”

Even more shocking was their response to the women they saw in the City of London. “We were standing outside the Gherkin and they were like ‘Why is that woman wearing a suit? What’s she doing?’ When I said she was going to work, I don’t think they believed me.”

Back in the classroom, the questions continued: “Are there female lawyers?”, “What’s a barrister?” and “What does an engineer do?”.

“It was at that point I realised something needed to be done,” says Dean, who was on the Teach First programme at the time – an initiative that fast-tracks high-flying graduates into challenging schools.

Many of her pupils came from families where little English was spoken at home. Some were the children of asylum-seekers or were themselves refugees. They didn’t know any doctors, lawyers or business owners who could give them work experience or advise them on their future plans. And while many spoke several languages, and had “resilience by the bucketload”, they lacked confidence, self-belief – and crucially – positive female role models who could encourage them to be ambitious.

The experience inspired her, along with Charly Young, a fellow Teach First graduate, to set up the Girls’ Network, a mentoring programme for girls aged 14-19. The initiative connects young people from schools in disadvantaged communities with women from a range of industries, creating the kind of networks they might not have within their own circle of family and friends.

Young women who take part attend an initial networking event, where they can meet lots of different mentors and choose one they feel they will get along with best. As well as giving practical advice and help with careers and university applications, mentors support the girls in developing other qualities such as leadership and communication skills.

Young explains: “A lot of the girls we work with don’t really have to communicate with anyone who is not their peer – and to speak to the head of a company, for example, is completely alien. They might think: ‘What do I have to say? Why should anyone listen to me?’ So exploring what people are interested in and having something to say in those kinds of situations can be very empowering.”

In the six months since its launch, more than 500 women from journalism, law, finance and engineering have volunteered their support, including the yachtswoman Tracy Edwards, actor Cynthia Erivo and Education Guardian columnist and campaigner Fiona Millar.

While girls consistently outperform boys in education (nearly 25% of exams sat by girls this year were graded A* or A, compared with just 17.6% of those taken by boys) women are still vastly underrepresented in the most influential jobs, with latest research from the Fawcett Society showing that less than a quarter of MPs, 17% of FTSE 100 CEOs and around 14% of the senior judiciary are women.

But while there are many young people’s mentoring schemes out there, none focus specifically on the issues that affect young women, like “a real lack of confidence, self-esteem and just not having the belief they can do anything,” says Young, who teaches in a secondary school in London.

While the boys and girls she teaches all have limited networks, girls suffer from “massive risk-aversion” when it comes to careers. “You’ll ask them what their aspiration is and the majority will say ‘to be like my mum or aunt … because they keep the family together and look after the family and the home.’ I mean, what a fantastic thing to aspire to do, but for some girls, that’s all they believe they can do.”

As Dean discovered, this can be simply because they don’t know many women who work. “We were having a conversation one day about Romeo and Juliet and discussing arranged marriages and someone said, ‘My mum got married at 14′. It turned out that almost all of their mums had been married by 18, so the expectation for some was really that they’d just get married and have a family.”

A-level student Maria, who is considering a career in social work, is one of the first young women to benefit from the Girls’ Network. While her parents, a bus driver and a care worker, are “very supportive” they aren’t necessarily able to answer all the questions she has about her future. Her mother, who was born in Pakistan and dropped out of school to get married at 17, speaks English, but can’t always understand some of the vocabulary in the information her daughter brings home from school.

Maria’s mentor, a social worker and counsellor, has not only helped her to consider her career options, she has also helped her to edit her personal statement for her university application.

“There are girls who want to go out and get a career but some of us have stuff holding us back, like money or finance or religion or culture, ” says Maria.

Seventeen-year-old April is also the first in her family to do A-levels. But while she dreams of becoming a professional singer, her family say she should pursue a ‘safe’ career like teaching. Having someone objective to talk to, who is not involved in her school or home life, is proving invaluable, she says.

“I’m not in school, I’m not a teacher, I’m not a parent, so perhaps they [the girls] can talk a little bit more openly to me,” says Marian Forking, owner of a digital and marketing communications company and one of the mentors on the scheme. “I’m doing an awful lot of listening, and it’s non-judgmental for me, because I don’t have an agenda.”

For young women at least, the Girls’ Network has the potential to fill the gap left by Aim Higher, the higher education initiative that was aimed at getting more young people from disadvantaged backgrounds to consider higher education, and the Connexions service, which provided independent careers advice and guidance to young people. Both were established under Labour and both were scrapped by the Coalition government.

Having helped some 50 young women in two schools during the pilot phase of the programme, Dean and Young say they receive inquiries “every day” asking them to help set up similar schemes in other regions. But while they have hundreds of mentors lined up and “ready to go” in Brighton, Liverpool and elsewhere, what they lack is money.

Until now, all their funding has been provided by voluntary donations, via a Paypal button on their homemade website. And while they are currently bidding for cash from various charities and funding bodies, if they are to achieve their aim of rolling out the programme across the UK and working on the project full-time (both are juggling voluntary work on the Girls’ Network with teaching jobs) they know they need a sustainable source of income.

Says Dean: “Watching the girls develop in confidence and seeing their eyes being opened to the possibilities available to them has been amazing, which is why we desperately want more young women to have that opportunity.”