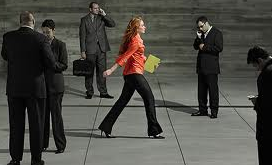 Editors Note: Although this story is about women in the workforce, it has significant implications for the young adults who will be entering the work force in the coming years and, more generally, the role of natural mentors in the lives of our nation’s young women.

In Sheryl Sandberg’s new book, “Lean In“, she suggests that part of the problem facing women in the workplace is reluctance from male executives to mentor younger female employees.

She may be right. A 2010 study from the Center for Talent Innovation (formerly the Center for Work-Life Policy), found that nearly two-thirds of men in senior positions pulled back from one-on-one contact with junior female employees because of fear of being suspected of having an affair. Meanwhile, half of junior women reported being nervous about one-on-one contact with senior men for the same reason.

Call it the Lolita Effect: Could choosing to be—or have—a mentor who’s significantly older or younger really hurt your career? Or is the idea that men and women of a certain age can’t be seen together hopelessly retro?

We asked a few high-powered men and women to tell it to us straight, and also tracked down expert tips on how to find (or be) a mentor in the workplace without raising eyebrows.

Some high-ranking male executives do own up to worrying about appearances, especially with much younger women. “When I was about 35, there was heightened awareness of sex discrimination and harassment, and the lawyer and seminars scared me,” says Oli Thordarson, 51, president and CEO of Alvaka Networks, an IT firm in Irvine, Calif.

“I wouldn’t want to defend myself against an allegation that I did something and the other party is a woman under 30, especially if she’s attractive,” he says. But Thordarson overcame his fear and mentored a young female colleague. “She proved to have an incredible amount of potential and talent, but I was very careful not to meet in a closed office, or to be sitting around the office with her when everyone else was gone,” he says. “It was as much for appearance’s sake as anything.”

Other execs say they don’t think twice about mentoring employees, regardless of their gender.

“Whether I mentored males or females usually depended on the mix of staff that I had,” says Cal Braunstein, 68, CEO of the Robert Frances Group, an IT consulting firm in Wilton, Conn.  “We did work to make sure that women were given opportunities, just like anyone else, so you didn’t end up with only males advancing to corner offices.”

And that’s a real career concern if you’re the younger employee in search of a seasoned mentor. “Ambition is ambition, and wanting to learn more and do better at your job is something that a lot of people share in,” says Sam Grobart, 38, a senior writer for Bloomberg Businessweek who has mentored male and female staffers alike. “Maybe there are certain corporate cultural aspects to this, and hedge funds might be a different kind of place to work than a magazine or a newspaper. But it never really occurred to me that I couldn’t mentor a woman.”

Mentor/Mentee: How to Make the Relationship Work

After doing research, she identified a family friend, Jeffrey Schwarz, who was starting his own fund and could show her the ropes. “Mentoring is a two-way street. You have to ask ‘What can you give to help your mentor?’” she says. As a Wharton business school grad, Finerman set up shop for Schwarz’s fund while he taught her the hierarchy of the investment business.

The Center for Talent Innovation also offers some pointers on forging a successful mixed gender mentorship:

And what if your’e a young woman in search of a mentor? Finerman says the request for mentorship should be natural. Start with someone you have access to and demonstrate your willingness to learn. Ask to join a prospective mentor’s project and wow them before you make your pitch.

And young women should pick a male mentor if they work in a male-dominated field, she says, but not just any man will do. “Pick a man who has daughters,” specifies Finerman, “he’ll see them in you and want to help.”

This story was originally published by Business Insider and LearnVest