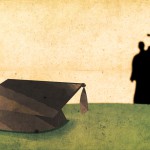 Editor’s Note: With the passage into summer, we have reached the season of graduation speeches. Many of these provide useful and relevant insight for mentoring. Today, we revisit Michael Lewis’ address, delivered a few years ago at Princeton, about luck and entitlement. Particularly in this age of inequality and class-based segregation, it’s easy to lose sight of just how much luck and arbitrary privilege can shape how we think about ourselves and others.

“A few years ago, just a few blocks from my home, a pair of researchers in the Cal psychology department staged an experiment. They began by grabbing students, as lab rats. Then they broke the students into teams, segregated by sex. Three men, or three women, per team. Then they put these teams of three into a room, and arbitrarily assigned one of the three to act as leader. Then they gave them some complicated moral problem to solve: say what should be done about academic cheating, or how to regulate drinking on campus.

Exactly 30 minutes into the problem-solving the researchers interrupted each group. They entered the room bearing a plate of cookies. Four cookies. The team consisted of three people, but there were these four cookies. Every team member obviously got one cookie, but that left a fourth cookie, just sitting there. It should have been awkward. But it wasn’t. With incredible consistency the person arbitrarily appointed leader of the group grabbed the fourth cookie, and ate it. Not only ate it, but ate it with gusto: lips smacking, mouth open, drool at the corners of their mouths. In the end all that was left of the extra cookie were crumbs on the leader’s shirt.

This leader had performed no special task. He had no special virtue. He’d been chosen at random, 30 minutes earlier. His status was nothing but luck. But it still left him with the sense that the cookie should be his.

This experiment helps to explain Wall Street bonuses and CEO pay, and I’m sure lots of other human behavior. But it also is relevant to new graduates of Princeton University. In a general sort of way you have been appointed the leader of the group. Your appointment may not be entirely arbitrary. But you must sense its arbitrary aspect: you are the lucky few. Lucky in your parents, lucky in your country, lucky that a place like Princeton exists that can take in lucky people, introduce them to other lucky people, and increase their chances of becoming even luckier. Lucky that you live in the richest society the world has ever seen, in a time when no one actually expects you to sacrifice your interests to anything.

The U.S. Isn’t Just Getting Older. It’s Getting More Segregated by Age.