How well do you know the facts about mentoring?

Attrition: In a recent study of 6,500 mentoring relationships, we found that overall prevalence of premature match closure was 38%, with rates climbing even higher among youth with more difficult circumstances and risks (Kupersmidt, Stump, Stelter, & Rhodes, 2017). Criminality (gang involvement or risk of becoming involved, juvenile delinquency, or court involvement) was highly predictive of early match closure, as was being a youth in foster care, immigrant, having a parent in prison, using substances, being a teen mother, and other more challenging backgrounds (see Figure below). A  report by Herrera, DuBois, and Grossman (2013) on risk profiles in youth came away with some striking results. 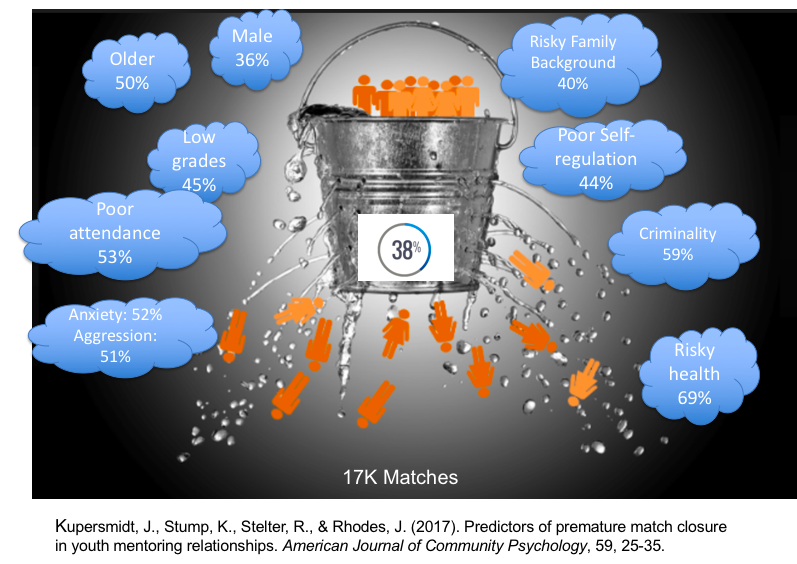 Volunteerism: This leaky bucket is particularly troubling when we consider how few volunteers are willing to make the necessary commitment each year. Drawing on the 2016 U.S. Census Bureau’s Current Population Survey (CPS, 2006-2015), my colleagues and I were able to assess, with unusual precision, the number of adult volunteer mentors in the U.S. (Raposa, Dietz, and Rhodes, 2017). Then, after gathering every study of youth mentoring we could find, we calculated its effects, as well as mentor and youth characteristics that might make a difference.  The CPS sample of 56,000 (N = over 100,000 adults) households is scientifically selected on the basis of area of residence to represent the nation as a whole, individual states, and other specified areas. Volunteers were defined as individuals who performed unpaid volunteer activities through or for an organization. They were classified as volunteer mentors in our analyses if 1) their main activity (at their main volunteer organization) was mentoring, and 2) they served 36 hours or more within the past year at this organization. The dosage criteria  does not include lower dosage, episodic, nor does it include paid mentoring. It does, however, align with the standards of effective practice (Garringer et al., 2015) and represents the minimum time commitment required by most school- and community-based mentoring programs in the U.S., essentially corresponding to one time per week for at least one academic year 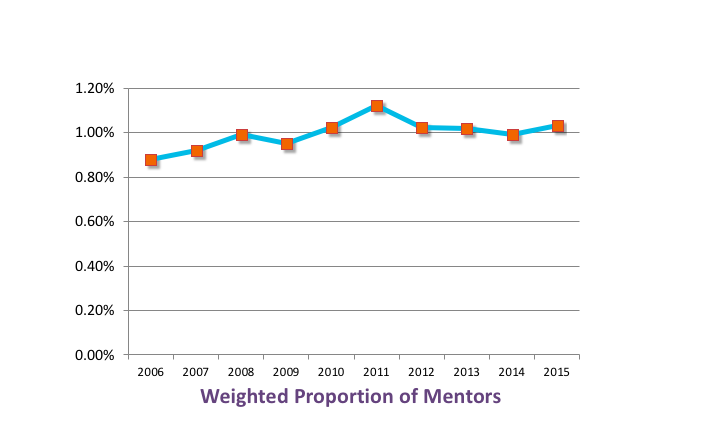 We found that, although rates of mentoring have shown modest, statistically significant growth, they are remarkably stable in practical terms—only around 1% or 2.5 million adults per year on average who, if we consider that many programs offer group mentoring, serve about four million youth per year. Surprised that formal mentoring programs don’t reach more youth? We were too. On the other hand, the steady state might be expected, perhaps even appreciated, in light of the dramatic declines in American volunteerism overall between the years 2006 and 2015 (Bureau of Labor Statistics, 2016).  Still, given that we only a small proportion of adults step up each year, we need to be better stewards of this precious resource

Overall effects: The leaky bucket is also a major drag on program effects. In fact, overall the overall effects of mentoring have not budged over the past three decades, as programs struggle to meet the needs of an increasingly stressed and vulnerable youth population. Although some programs have strong effects, the overall profile of mentoring is brought down by the many studies with negative or modest effects. In other instances, effects have eroded to non-significance within only a few months of program participation (Herrera, Grossman, Kauh, & McMaken, 2011).   We know this because a series of meta-analyses enable us to empirically summarize the results of mentoring across multiple studies and to statistically determine the strength of program-related effects (effects around 0.20 is considered “small,” 0.50 “medium” effect, and 0.80 or higher is considered a  “large” effect; Cohen, 1988). Results of our (hopefully) soon-to-be released meta-analysis (Raposa et al, under review) are remarkably consistent with past comprehensive meta-analyses of youth mentoring, which have shown overall effect sizes ranging from .18 to .21 (Dubois 2002; 2011). In another study, Tolan, Henry, Shoen and Bass (2005) conducted a meta-analysis of 31 youth mentoring programs, finding effect sizes ranging from 0.24 to 0.28 for delinquent and aggressive outcomes, respectively. Eby, Allen, Evans, Ng and DuBois (2008) conducted a meta-analysis of 40 youth mentoring evaluations. Again, the effect sizes were generally small, ranging from only 0.03 to 0.14.

The stubborn march of low effects across time and studies is disappointing in comparison to those found in evidence-based youth development and therapeutic relationships. For example, a meta-analysis of 177 prevention studies found effects ranging from 0.24 to 0.93, depending on program type and target population (Durlak & Wells, 1997). Meta-analyses of youth psychotherapy, encompassing hundreds of studies, have reported even stronger mean effects depending on the age of the children being treated (Weisz, Sandler, Durlak, & Anton, 2005). Likewise, universal mental health interventions that incorporate skills and practice are typically in the high to moderate (e.g. Conley, Shapiro, Kirsch, & Durlak, 2017; Weisz et al., 1995; Weisz et al., 2017) (see below). 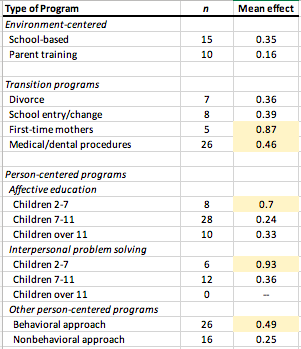 These data are a sobering reminder but, rather than despair, we can commit to a targeted, evidence-based approach.  Fortunately, we have many examples of models of programs that work. The time for greater rigor is now and we have the knowledge to reduce attrition and improve outcomes. Clear-eyed, nuanced calculations of what it takes to deliver high quality, effective youth mentoring are essential to improving the effectiveness of youth mentoring. Effective (and cost-effective) solutions are in everyone’s best interest and wishful thinking that all mentoring works fosters complacency, underinvestment in evidence-based practice, and, ultimately, less effective interventions.

Much remains to be done to understand the complexities of mentor relationships and to determine the circumstances under which mentoring programs make a difference in the lives of youth. A deeper understanding of mentoring relationships, combined with high quality programs, enriched settings, and a better alignment of research, evaluation, and practice, will position us to harness the full potential of youth mentoring.