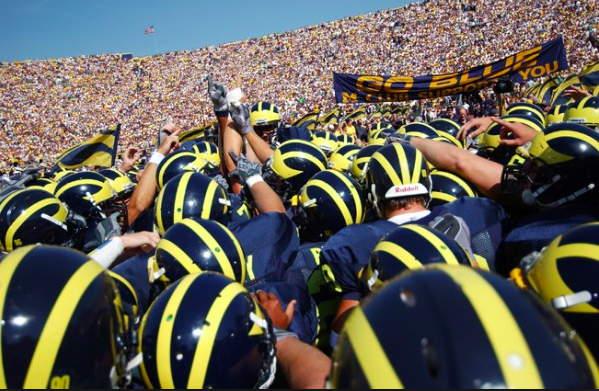 KALAMAZOO, MI – For about five minutes, Lloyd Carr stood at the podium in front of a few hundred people Monday evening and enthusiastically read one of his favorite poems.

The former University of Michigan football coach changed tones, reading some lines softly and some loudly during the annual Big Brothers Big Sisters benefit dinner at Radisson Plaza Hotel. He waved his arms at certain points and paused at others. But, the whole time he read “Casey at the Bat” by Ernest Thayer he never looked at a piece of paper.

Carr had the poem memorized. He said a teacher during his sophomore year of high school assigned him the poem to read in front of the class. He said he was terrified of speaking in public at the time, but the teacher inspired him by challenging him.

The teacher proved to be one of his greatest mentors, but he said he didn’t realize it until years later. That’s one of the messages Carr delivered during his speech, which also included mentions of former Michigan coach Bo Schembechler and current coach Jim Harbaugh.

“As a mentor, you don’t realize the impact you will have,” Carr said. “Rest assured, you will have that impact.”

Carr was greeted with a round of applause from the crowd and after concluding his speech with Michigan’s signature “Go Blue” chant, the crowd again cheered.

According to event officials, over $500,000 was raised during the benefit evening, which included silent and live auctions of items ranging from signed footballs to vacations and trips.

The former coach focused his talk on mentoring kids, but he also talked about tradition, from that of the U-M football program to the work Big Brothers Big Sisters does.

Carr said he has tried to do a better job of tuning in to national and world news since he retired in 2008. He said he has become alarmed by today’s youth.

“We have a serious problem with young people,” he said earlier in the day at a press conference. “We have a serious gang problem in this country. One of the answers is there is a lot of kids out there that don’t have anyone in their life trying to steer them the right way or trying to help them through the difficult stages of growing up. It’s not an easy thing. If you could teach a kid how to deal with adversity or how to persevere when things aren’t going his way and to never give up – I just think there are a lot of ways to influence a kid in the right way. We just have to have the people that will do it.”

Carr said during his speech he is always learning new lessons. He got a laugh out of the crowd by telling the story of a halftime interview during a 2003 game against U-M rival Ohio State. His Wolverines team was playing one of its best games of the season and led at halftime. Instead of being asked about the lead, he said a reporter asked him why he took a knee with 30 seconds remaining in the second quarter.

“I said, ‘What a dumb question,'” Carr joked, adding that his wife scolded him after the game for his response. “I’m always learning and that day I learned there is no such thing as a dumb question.”

Another one of Carr’s stories involved Schembechler, U-M’s legendary coach. Carr said he was beginning his first season in 1995 when Schembechler stopped by his office and told him to forget about any feelings of doubt he might be having.

“That’s what a great mentor does,” Carr said Monday night. “They inspire people.”