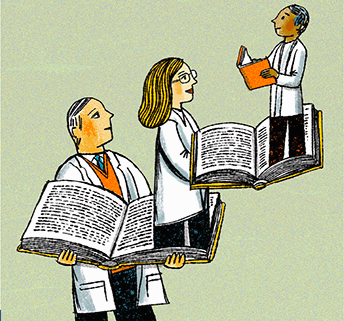 The undergrad joining the lab where I worked as a research fellow certainly knew how to make a first impression. “I looked up your work—cool stuff!” he said when we first met. “Fancy working with the best? That’s me, of course!” He was clearly smart and ambitious. But I wasn’t sure I was qualified to take someone under my wing. I had only started in research 2 years earlier, after finishing my medical degree. The bigger hurdle was the pressure to “publish or perish,” which made me hesitant to take on extra responsibilities. But, as I reflected on my own path into research and the crucial role played by my mentor, I realized that I needed to pay it forward.

“[My mentor’s] character inspired me, and hopefully I will inspire my mentees.”

I had always been interested in research. But for various reasons, I initially pursued medicine—until my medical school’s final requirement that I complete a brief clinical training period elsewhere led to a serendipitous meeting. I was waiting outside my clinical supervisor’s office when the prominent professor who worked in the next office came by. I knew who he was, and I was impressed with his lab’s work developing breast cancer drugs, but I didn’t expect him to recognize me. I was startled when he said, “I see you in every meeting. What are you working on?”

I told him about myself and my work, and our conversation continued for more than an hour. His respectful, down-to-earth demeanor immediately made me feel at ease. He seemed to really care about what I had to say. When he learned that I was interested in research, he gave me a stack of papers to read and told me that he might have a spot for me in his lab. I didn’t understand why this famous scientist would make space for me, someone with no research experience. But he saw something in me. After a proper interview, and finishing my medical degree, I joined the lab.

In the beginning, I had no idea what I was doing. But my mentor was understanding and patient. With his support, I got my footing and was starting to feel like a real scientist. Now, it was time for me to do this for someone else.

When I started as a mentor, I struggled a bit. I worried about accidentally teaching my mentee something inaccurate. Adjusting my teaching style to suit his learning curve was challenging at times. But we were patient with each other and worked together to develop a productive relationship. Following my own mentor’s approach, I treated every encounter as a meeting of equals and encouraged open communication. My mentee asked tough questions. He challenged me and proved me wrong at times. And I loved it. By the end of his summer in the lab, I had a newfound appreciation for the rewards of being a mentor. Mentorship sharpened my communication, teaching, and technical skills, and it gave me a sense of purpose, confidence, and fulfillment.

Since that undergrad left our lab, I have continued serving as a mentor for other students. Each relationship is enriching in its own way. Recently, for example, I learned how to support a mentee through failure. My current mentee and I had worked tirelessly to prepare for her university’s undergraduate research competition, but she didn’t win and was quite disappointed. I didn’t want this one setback to extinguish her fire for research, so it was up to me to provide a positive, encouraging perspective. I took her out for dinner to celebrate her will to compete and the experience she had gained. And I told her about a recent disappointment of my own—losing a science communication competition—to show her that she was not alone.

I was recently accepted into a split-site Ph.D. program at another institution, through which I will earn my research doctorate while continuing my current projects in my mentor’s lab. This opportunity was only possible because my mentor took a chance on me. His character inspired me, and hopefully I will inspire my mentees similarly. There are many amazing individuals waiting for someone to apply just enough pressure to turn them from rock to diamond. We must all try to be those “someones.”

This is an article distributed under the terms of the Science Journals Default License.