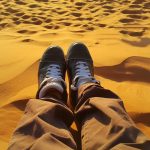 Advising someone to “walk a mile in their shoes” as a way to get them to empathize with others may be bad advice for their emotional health, according to a new study.

“That’s because there are two routes to empathy and one of them is more personally distressing and upsetting than the other,” says Michael Poulin, associate professor in the University at Buffalo psychology department and coauthor of the study in the Journal of Experimental Psychology.

The findings, based on stress physiology measures, add a new and previously unexplored dimension to understanding how choosing a path to empathy can affect a helper’s health and well-being. The study’s conclusions provide important insights into areas ranging from training doctors to raising children.

The routes to empathy Poulin mentions diverge at the point of the helper’s perspective. The two may sound similar, but actually turn out to be quite different in terms of how they affect the person who is trying to help another.

“You can think about another person’s feelings without taking those feelings upon yourself (IOPT),” says Poulin. “But I begin to feel sad once I go down the mental pathway of putting myself into the place of someone who is feeling sad (ISPT).

“I think sometimes we all avoid engaging in empathy for others who are suffering partially because taking on someone else’s burdens (ISPT) could be unpleasant. On the other hand, it seems a much better way to proceed is if it’s possible to show empathy simply by acknowledging another person’s feelings without it being aversive (IOPT).”

Some previous research has tried to get at the question of stress relative to IOPT and ISPT by asking people to report how they felt after a helping behavior. But the current study breaks new ground by examining the effects of perspective taking while someone is engaged in helping behavior.

“I have some degree of uncertainty about how well people are parsing out the distinction when reporting how much they were feeling for themselves versus the other person,” says Poulin.

That uncertainty motivated the current study’s design, which measured a cardiovascular response that reliably indicates the difference between feeling personally anxious or not.

“When we are feeling threatened or anxious, some peripheral blood vessels constrict making it harder for the heart to pump blood through the body,” says Poulin. “We can detect this in the lab and what we found is that people who engaged in ISPT had greater levels of this threat response compared to people who engaged in IOPT.”

This conclusion could be especially useful in the context of medical professions, like doctors and nurses, especially in areas with high rates of burnout, according to Poulin.

“Many of these professionals see so much pain and suffering that it eventually affects their careers,” he says. “That might be the result of habitually engaging in ISPT. They put themselves in their patients’ shoes.

“Maybe we can train doctors and nurses to engage in IOPT so they can continue to be empathetic toward their patients without that empathy creating a burden.”

Parents might even consider the study’s finding when thinking about how they speaking to their children in certain circumstances. “Rather than saying to a child, ‘How would you feel if that were done to you?’ maybe we should be saying, ‘Think about how that person is feeling.’”

Mentoring pose a number of challenges, but perhaps one that is not quite as publicly acknowledged is the burden that providing support to a youth facing a lot of stressors and challenges can have on the mentor themselves. This is a psychological burden that can increase the likelihood of burnout and early match closure.

It may be a small piece of the larger puzzle that is mentor self-care, but a slight shift in how mentors attempt empathic understanding, using IOPT instead of ISPT, can help to reduce the emotions activated by mentors envisioning themselves in emotionally difficult situations.

As the authors state at the end of the article, this is also a change in approach that could be helpful in fostering the development of empathy in young mentees without adding to their existing emotional burden.

The midlife doldrums are a social crisis. Now there’s momentum for some radical fixe