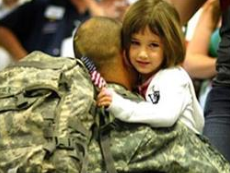 About five years ago, I approached some colleagues with the idea that school-based mentoring (SBM) was a good fit for children from military families. Researchers were learning that multiple and prolonged combat deployments were having significant and negative effects on military children and families. We reasoned that pairing military children with a school-based mentor—even if it were only for one academic year—could be useful way to support these children and their parents. Because we were researchers, we wanted to test this hypothesis, but first we needed research funding.

Meanwhile, others also thought that mentoring could be a useful resource for military children. One of those individuals was T. Boone Pickens, whose foundation awarded $3 million in 2008 to support the mentoring of children whose parents were deployed military personnel. With generous funding such as this, Big Brothers Big Sisters of America and other mentoring organizations (e.g., Amachi) have made valiant attempts to provide supportive mentoring to military children. Unfortunately, many of these efforts have met with limited success.

The challenge, it seems, is that military families are reluctant to seek help, even when that help is a volunteer mentor. As a general rule, military families are quite resilient and it’s a commonly accepted aspect of military culture that military folks take care of their own. This is a noble mindset but it has been a recurring obstacle for those who have developed service programs and research projects designed to aid military personnel and their families. And youth mentoring organizations are no exception: Despite ample funding and a strong desire to support military children, many mentoring organizations have struggled to make that happen.

An important exception is the Operation Bigs program run by BBBS of San Diego. This program and its fine staff have successfully and consistently provided mentoring to children of military personnel for over 10 years. Key to the success of Operation Bigs is the fact that many of the schools served are located on base at Camp Pendleton. This is a huge advantage because every student in the schools is from a military family. Over the years, staff at BBBS-San Diego used their access to military schools to develop a mentoring program that is both practical and appealing to military families.

As researchers, our search for funding to evaluate a military student mentoring (MSM) program were greatly aided by support from Washington State Mentors, an affiliate of the National Mentoring Partnership. Janet Heubach and her colleagues at WSM invited a group of us to Seattle for a 4-day planning session. Among those attending that meeting were Renee Spencer, a well-known mentoring researcher, and Amy Slep, whose research background is not youth mentoring but the study of military families.

Following that meeting, we submitted a proposal to the Institute of Educational Sciences (IES), which is the U. S. Department of Education’s version of the National Institutes of Health (NIH). Our decision to seek IES funding was based on two assumptions. The first was that many school districts, especially those located away from a military base, were struggling to find practical ways to help military-connected students. The second assumption was that most mentoring organizations would have trouble engaging military parents and families unless they had help from local schools and school district administrators.

Our grant proposal included plans to develop and evaluate two different MSM models. We proposed developing a service delivery model that could guide schools as they recruited military students into a specially designed mentoring program. We also proposed developing a SBM program that would be geared for military students and adapted from the Operation Bigs program in San Diego. This summer, after years of planning and 3 different submissions (the original plus 2 revisions), we were finally awarded $1.3 million to conduct a 4-year MSM project!

Our project will be conducted in the elementary schools of the North Thurston Public Schools (NTPS) district near Olympia, WA. We’ll use grant funds to help NTPS hire a district-level coordinator who will be tasked with forging home-school-community (HSC) partnerships that link local schools, military families, and community organizations in an effort to serve military students. Each school will have an HSC Action Team that comprises a school staff person, a military parent from the school, and a community organization/business representative. HSC Action Teams will be responsible for identifying and engaging military families, referring military students for school-based mentoring, and recruiting adult volunteers to serve as mentors. Referred children will be paired with a school-based mentor that is screened, trained, and supported by BBBS of Southwest Washington, a partnering agency that will be implementing the MSM school-based mentoring model.

In Year Three of the project, we plan to conduct a pilot test of MSM’s service delivery and SBM models. Hopefully, we’ll find support for both models. Our ultimate goal is to learn enough to equip and guide other school districts that wish to serve those families who have served our country with courage and distinction.

Profiles in Mentoring: Varsha Waishampayan and her work mentoring professionals