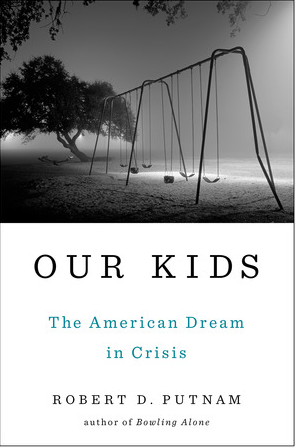 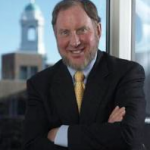 Editor’s Note: In Our Kids: The American Dream in Crisis, Robert D. Putnam, a Harvard University public policy professor  explains how growing class differences are have given rise to dramatically unequal opportunities for our nation’s youth. Putnam describes how, in his hometown, families from different economic circumstances attended the same schools, played on the same teams, and provided a context for less advantaged youth to benefit from a rich web of support and connections Over the past few decades, children born into less educated families (he uses education as a proxy for class) have been consigned to impoverished school systems and are granted few if any opportunities to interact with their more educated peers and adults. This has dramatic consequences for upward mobility and underscores the vital role of mentors. I recommend reading the book.

In the meantime, we excerpt an excellent review by Sarah D. Sparks (reprinted from Education Weekly)

“Mr. Putnam finds large and widening gaps—often beginning in the mid-1980s to early 1990s—across a slew of measures: from frequency of family dinners and how much families spend on children, to test scores and participation in school-based extracurricular activities, to access to informal mentors and even children’s levels of basic trust in their neighbors and society. These “scissors” trends highlight every place a lifeline is being cut in the lives of children whose parents earned a high school diploma or less.

Those divides also hint at a deeper and more fundamental gap between wealthy and poor students: the connection gap.

“Poor kids are incredibly isolated from everything,” Mr. Putnam told me. “What they most lack is some adult who is steadily caring for them. It’s not just love, but providing them with the kind of guidance that people coming from [well-off] homes are increasingly surrounded by. I don’t just mean guidance about careers, but guidance about life.”

Mr. Putnam, whose 2000 book Bowling Alone looked at declining civic ties among adults, argues that students in poverty growing up in the middle of the last century had greater economic and social mobility than their counterparts do today in large part because adults at all socioeconomic levels were more likely then to see all students as “our kids.”

“We knew there was increasing inequality, but we didn’t really understand it in the way it’s presented here,” said Gary King, the director for the Institute for Quantitative Social Science at Harvard University, who was not associated with Mr. Putnam’s book. “This is not just a bunch of trends that are interesting; this is a dramatic change in American life and is something we really need to pay attention to and do something about. Thinking about what kind of America we really want is really essential.”

Part of the divide comes from a racial generation gap—a separate analysis shows Americans over 65 are overwhelmingly white, while a majority of schoolage Americans are now minorities. But Mr. Putnam also finds that achievement gaps between wealthy and poor students of the same race are now larger than gaps between races of the same economic group.

The wealthiest quarter of students were two to three times more likely than students from the poorest 25 percent of families to have an adult mentor outside of the family. Mr. Putnam argued these informal relationships with adults—particularly adults outside the students’ economic class—are crucial to helping students find jobs, navigate the college application process, and create a support network.

In Mr. Putnam’s hometown of Port Clinton, Ohio, several poor classmates in 1959 found mentors and academic supports through school sports and academic clubs. That’s less likely to happen today: Poor students’ participation in extracurricular activities fell from nearly 80 percent in the early 1980s to about 65 percent in the mid-2000s. Wealthy students’ participation stayed steady at more than 85 percent during the same period.

“There’s a lot more to education than just the lecture, and that has been vividly demonstrated,” Mr. King said.

Mr. Putnam directly ties education to economic and social class; he speaks interchangeably of poverty and earning a high school degree or less, and of wealth and earning at least a four-year college degree.

Schools are not to blame for the academic gap between rich and poor students that starts before kindergarten, but, Mr. Putnam said, “the American public school today is as a kind of echo chamber in which the advantages or disadvantages that children bring with them to school have effects on other kids.”

He pointed to an analysis by the School Funding Law Center which found that as of 2009, 16 states had funding systems that provided less money per pupil to high-poverty school districts, while only 17 provided more per-pupil spending for districts with greater poverty. (An update of the studysuggests those trends have worsened, with only 14 states providing significantly more money to high-poverty schools, and 19 states providing significantly less.)

Even where high-poverty schools get compensatory funding, Mr. Putnam told me: “Equalizing inputs is not equalizing outputs. Just because you have the same student-teacher ratio, just because you are investing the same dollars per kid, does not mean you are closing those gaps.”

As a result, nearly 15 years after the federal education law was revised to “leave no child behind,” an analysis of the National Education Longitudinal Study data finds that even the brightest students in poverty can’t get ahead. Students in the poorest quarter of families who performed in the top third on national mathematics achievement were slightly less likely to graduate college than the worst math performers in the wealthiest quarter of families, 29 percent versus 30 percent.

The grim outlook for students in poverty is a major problem for schools, which increasingly are judged on their ability to close achievement gaps and boost academic outcomes for poor students.

Mr. Putnam showed great optimism that even in a contentious political landscape, both in Washington and the states, consensus could be built to improve supports for children in poverty.

“Six weeks before [the 1965 Civil Rights marches in] Selma, Everyone said the civil rights bill was dead on arrival, because the politics … wouldn’t allow it. Six weeks later, that was completely overturned and the ones who had spoken against it looked foolish,” he said. “Big change is certainly possible in America.”

The book offers a few suggestions on ways educators can help rebuild poor students’ social and educational supports, including: