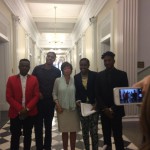 Editor’s note: On Oct. 8, my colleagues (Megan Blondin and Kristen Truffa from MANY; Janis Kupersmidt from iRT) and I had the rare opportunity to attend a meeting at the White House in which officials announced efforts to improve the lives of children of incarcerated parents, including our new grant to provide and evaluate training enhancements to children of incarcerated parents. 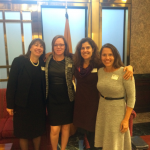 Here is a description from the White House blog.

Today, officials from the White House, the Department of Justice (DOJ), and the Department of Health and Human Services (HHS) welcomed a diverse group of federal officials, non-profit workers, faith leaders, school administrators, researchers, and child welfare advocates to the White House, to announce a series of steps aimed at providing stronger support to help children with incarcerated parents succeed, and overcome the unique obstacles they often face.

President Obama has been committed since day one of his presidency to the idea that every child should have an equal opportunity to learn, grow, dream, and thrive. Yet for children of incarcerated parents, this can seem like a far-off reality.

Nationally, more than 2.6 million children have a parent in prison, and approximately half of these children are under the age of 10 years old. Losing a parent to incarceration can result in devastating consequences for children, including poverty and housing instability. Nearly 20% of all children entering the child welfare system have an incarcerated parent, and a recent study suggests that children with parents in prison are at an increased risk for asthma, obesity, ADD/ADHD, depression, and anxiety.

Since taking office, President Obama has called for increases in the Bureau of Prisons budget to expand education programs that strengthen family and parental ties, and for demonstration grants within the Second Chance Act to enhance parental and family relationships for incarcerated parents as a re-entry strategy.

In a series of announcements today, the Department of Justice unveiled the newest round of grant awards from the Office of Juvenile Justice and Delinquency Prevention, the Children of Incarcerated Parents Mentoring Demonstration Program, and the Second Chance Act – Strengthening Relationships Between Young Fathers and Their Children. In addition, the Director of the Bureau of Prisons, Charles Samuels, announced the creation of a new Reentry Resources Division at DOJ, and Pamela Hyde, Administrator of the Substance Abuse and Mental Health Services Administration at HHS announced new resources to help incarcerated parents with reentry and navigating the child welfare system.

The announcements were made as part of today’s White House event, which featured remarks by Valerie Jarrett, Senior Advisor to the President, and Cecilia Muñoz, Director of the White House Domestic Policy Council. The audience also heard from Miss America 2012, Laura Kaeppeler-Fleiss, who spoke on her personal experience as the child of an incarcerated parent.

Also featured during the event was the premiere of “Echoes of Incarceration,” a documentary film project commissioned by the Children’s Television Workshop (Sesame Street). “Echoes of Incarceration” provides intensive filmmaking and advocacy training to youth aged 16 to 22 to produce documentary films told from their own life experiences as children of incarcerated parents.

Each of us has a role to play in ensuring that children of incarcerated parents have the opportunity they deserve to live happy and successful lives. To learn more about President Obama’s leadership, the Administration’s efforts, or to look for ways to do your part, please visit the federal Children of Incarcerated Parents web portal here. 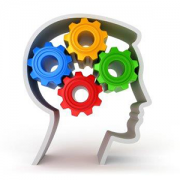