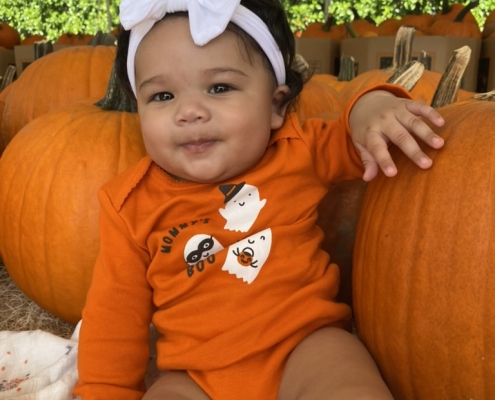 Cutest baby in the universe

Cuteness overload: An overload of cuteness; when something or someone is so super cute that there is no word for it.

Cute attack: A sensational response incited by the witnessing of something cute, precious, fuzzy, or otherwise snuggly. Symptoms include chills traveling up the spine and through the fingertips, impulsive smiling and jerking of the limbs. Severe cases of cute attacks can cause high-pitched squeals and temporary spasms of the entire nervous system, forcing its victim to crumble helplessly to the ground.

Seeing something cute tends to evoke an emotion – an emotion with no name in English, German, or Norwegian, although others, such as the Uralic languages, do name it: elérzékenyült in Hungarian, heldinud in Estonian, heltyä in Finnish1. An emotional response to cuteness is widely recognized (if not named) by marketing professionals and utilized in commercial and charity advertising (Duffy and Burton, 2000; Nittono et al., 2012; Buckley, 2016; Nittono, 2016), environmental campaigns (Huddy and Gunnthorsdottir, 2000; Ruanguttamanun, 2014), and product design (Nenkov and Scott, 2014). Additionally, the Internet is filled with user-generated content of cute babies and animals that are evidently posted, viewed, shared, and liked because they evoke this emotion.2 There are people whose job it is to identify cute web content (Baron, 2014; Labato and Meese, 2014). Moreover, a positive affective response to cuteness is apparent in responses to the International Affective Picture System (IAPS), widely used in emotion research (Lang et al., 1997); the seven images rated highest in positive valence are all images of cute animals or human babies.

Cuteness is said to be one of the most fundamental influences on human behavior (Kringelbach et al., 2016; see also Dale, 2016). Although labels for it have been offered, such as “cuteness response” (Sherman and Haidt, 2011), “cute-affect,” “aww,” or “cute-emotion” (Buckley, 2016), the emotion that cuteness evokes has yet to be well-conceptualized or experimentally characterized. The current research aims to test the hypothesis that kama muta (Sanskrit for “moved by love”; Fiske et al., 2017a,c) is a particular emotion that people commonly experience in response to cute animals.

What Cuteness Is, and What Emotion It Evokes

…The effect of cuteness on caretaking may be mediated by a certain kind of empathy, as this trait is thought to dispose one to altruistic behaviors such as caretaking (Batson et al., 2005). Batson et al. (2005) asked undergraduate participants to either read about a vulnerable protagonist (child, dog, or puppy) recovering from a broken leg, or read about a less vulnerable and less cute recovering adult. Cute vulnerable targets evoked stronger self-ratings of being sympathetic, compassionate, tender, softhearted, warm, and moved. These adjectives are thought to reflect the empathic concern state that is typically evoked by responses to others in need (Batson et al., 1987). This state has been hypothesized to reflect a parental caretaking response to vulnerable human babies (Niezink et al., 2012). Concordant with this hypothesis, Lishner et al. (2008) found that participants felt more empathic concern for human Kindchenschema faces and voices compared to adult counterparts. Similarly, Levin et al. (2017) demonstrated that reports of abuse of a child, puppy, or adult dog evoked more empathic concern and distress than reports of the same suffering of an adult human. Zickfeld et al. (2017a) found the same Kindchenschema effect on empathic concern for animal faces.

In sum, cute animals have facial features of the Kindchenschema, an evolved elicitor of attention, liking, approach, compassion, motivation to care for and protect one’s own infants and those of close kin. Humans thus seem to respond to cute animals in a similar way as to human infants, presumably triggered by the Kindchenschema. In addition, cute animals are perceived as vulnerable and needy, and people high in trait empathic concern seem to respond more strongly to cuteness than people low in empathic concern. Less consensus has been reached, however, about the emotional state evoked by perceiving cuteness. According to one theory, cuteness may evoke a specific positive emotion, kawaii, which motivates approaching others, while another approach suggests that cuteness tends to evoke a dimorphous response, which motivates both care and behaviors that look like aggression. We propose that cuteness evokes a specific positive emotion, kama muta, which motivates devotion to communal relations.

Kama muta theory postulates that a specific emotion, kama muta – which English speakers may label feeling moved or touched – occurs when a communal sharing (CS) relationship suddenly intensifies (Fiske et al., 2017a,c; see Zickfeld et al., in press for a review of research based on the vernacular lexeme, moved). Kama muta is a positive emotion that people actively seek out, like to evoke in other people, and want to experience together with others. Like other emotions, it varies in intensity….

“They like me, they like me not”: Popularity and adolescents’ perceptions or acceptance predicting social functioning over time.