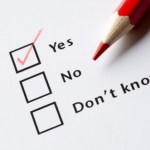 Remarkably few studies have focused on mentors’ experiences in relationships. To address this gap, my colleagues and I designed and validated a mentor-reported measure of relationship quality. The result is a new questionnaire that might be useful not only for evaluation but for everyday case management. Notably the scale (the Mentor Strength of Relationship Scale) represents the first mentor-report relationship quality scale with established psychometric properties.

A growing number of studies have highlighted the importance of investigating the quality of the relationships that are formed between mentors and youth. Although several questionnaires have been developed to measure mentor-youth relationships, researchers have tended to focus on mentees’ perspectives. Nonetheless, studies using scales that were originally designed for other caring adults (e.g., for teachers or psychotherapists) have highlighted the importance of assessing mentors’ perspectives as well. As part of the longitudinal data collection efforts of BBBS community-based mentoring programs nationwide, my students and I sought develop and test the properties of the mentor version of the Strength of Relationship (MSoR) scales, which assesses relationship quality from the mentor’s perspective (MSoR).

The Mentor Strength of Relationship (MSoR) Scale consists of fourteen mentor-reported items which were developed as part of my year-long stint as a match support specialist at two different mentoring agencies. In this capacity, I maintained ongoing contact with the volunteer mentors, youth, and parents in her caseload, provided ongoing supervision to a wide range of adult-youth dyads, and attended match support meetings where common match issues and their resolution were discussed among agency staff. From this activity, as well as discussions with additional practitioners (thank you Big Sisters of Greater Boston and Big Brothers Big Sisters of Mass Bay) and researchers, a list of 75 items that captured the experiences and frustrations of mentors in relation to their mentees was created. From this item pool, fourteen items that best captured mentors’ common positive and negative perceptions and experiences in relationships were chosen rationally by a panel of three mentoring researchers and three mentoring practitioners for inclusion in the.

On the scale, mentors were prompted to rate the extent to which they agreed with the fourteen items in the final pool, such as “My Little and I are interested in the same things” and “I feel close to my Little”  Answers were scored on a five-point Likert scale, ranging from (1) “strongly disagree” to (5) “strongly agree. Internal consistency for the fourteen items was strong, alpha = .85.

Youth Strength of Relationship (YSoR) Scale was  is a version of the original Relationship Quality Scale (Rhodes, Reddy, Roffman & Grossman, 2005), which was slightly revised to include a more balanced set of positive and negative relationship experiences.

Moreover, since relationship duration is a well-established benchmark of program effectiveness, which predicts youth impacts in both CBM and SBM programs, these results suggest that the SoR may also predict the benefits that youth will derive from mentoring relationships. It should be noted, however, that the SoR accounted for a relatively small percentage of the variance in relationship duration, raising questions about what other factors, besides strength of relationship, may contribute to how long mentoring relationships last. Nevertheless, these results suggest that negative responses might be used as a screening tool to identify relationships that are at risk for early termination and target them for additional support. Particularly in the context of large caseloads, the items on the MSoR scale might provide an efficient framework for eliciting mentors’ reports of more specific early problems than typically emerge from the more general, “how are things going?,” prompt.

Although future research is needed for the continued validation and refinement of the scale, the SoR appears to be a psychometrically sound instrument that can be used to measure relationship quality from the perspective of mentors, and is the first validated instrument to include the mentor’s perspective. It also indicates that quality of relationship, as measured by the SoR at 3 months, can predict relationship duration, suggesting that it may be a useful tool for identifying matches that may be at risk for early endings. 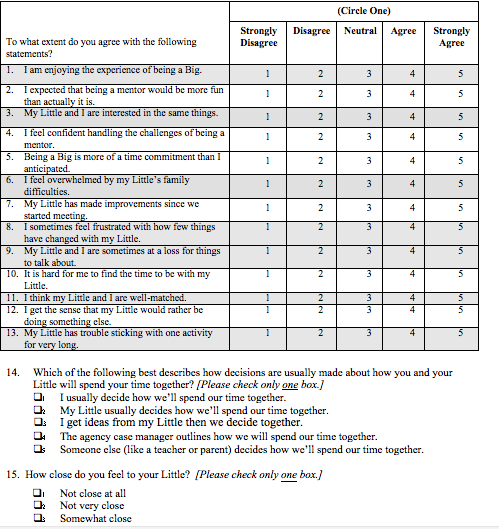