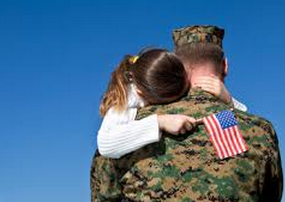 “When (a) family member’s gone, it’s a great stress on the whole family,” says Alisha Watkins, a former military spouse whose daughter is matched in the Amachi Expansion for Military and Civilian Families (AEMCF) program through subgrantee Big Brothers Big Sisters Lone Star.  Having a mentor can “take (a child’s) mind off ‘my mom is gone or my dad is gone.’”

Over the past two years Amachi has been reaching out to military families hoping to ease some of the stress by matching these youth with caring mentors.  This first-of-its-kind initiative is funded by a grant from the Department of Justice, Office of Juvenile Justice and Delinquency Prevention (OJJDP) to support mentoring programs for youth with a parent in the military.

Military parents may have a “lack of understanding the benefits,” says Watkins. She advises parents to “think about it and maybe take yourself out of the equation.  Ask your child (if they want a mentor).  It’s for their benefit,” she says.

Research has shown that children in military families, especially those whose parents are deployed, can experience unique challenges including multiple deployments and extended absences, as well as anxiety over the safe return of their parent.  During these tense times, these youth can especially benefit from additional support and fun activities.    Recently some of the military families in the AEMCF program shared how having a mentor has impacted their lives.

“I like to spend time with (my mentor),” says Watkins’ daughter India who has been matched for almost two years.  “You can talk about how you feel and be yourself, adds India. “They’ll listen and they won’t put you down or anything but they’ll make you feel better.”

When India’s father was deploying, Watkins, who has a demanding job, sought a mentor for her daughter.  She advises other military parents to do the same. “It is good for kids to have somebody who isn’t always a family member,” says Watkins. “Sometimes children receive things differently when it comes from an outside source.”

It’s nice “knowing that I’m making difference in her life,” says India’s mentor, Sarah Cargill. “Hopefully she’ll want to do the same thing for someone else.”  Cargill says she was thankful to have mentors growing up and that she always knew she wanted to give back and become a mentor when she got older.  But she didn’t expect just how much she would be appreciated. Cargill was incredibly touched when India gave her a handmade bracelet that took her four hours to make.  That really “validates what I’m doing,” says Cargill.

Chris Jenkins, a youth matched in AEMCF through subgrantee Urban Ventures Leadership Foundation, appreciates having a mentor as well. “They really do give you that support that you don’t get at home,” says Jenkins.  “You should have someone extra there.”

When Jenkins was matched with Shanna Gronewold three years ago, her parents had separated in addition to her father being deployed.  She had lost her motivation for school, was only attending twice a week and had to go to court. “I wasn’t confident that I would be able to change that,” said Gronewold.  But she stuck with it and kept her commitment to meet weekly with Jenkins.  Now she attends school every day of the week and is “making up credits that she needs to make up”, says Gronewold.  It’s been a surprise “how powerful time can be in building relationships,” states Gronewold. “Just time with someone builds something.”

John Zogaria who is a mentor matched in AEMCF through subgrantee Big Brothers Big Sisters of Greater Rochester agrees.  “If you can change one life it’s amazing how many more that can impact,” says Zogaria who has been mentoring Trenton Bryan for a year.  Bryan’s stepfather is in the Reserves. Zogaria also served in the Reserves for many years.  “We understand certain languages,” says Zogaria referring to his ability to connect and understand Bryan’s lifestyle.

Their time together is comfortable and relaxed.  “I think he enjoys getting away (and) having different experiences,” says Zogaria.  Although Bryan has liked hiking, catching frogs, and getting help with homework, the best thing about having a mentor has been learning to play the drums.  He’s wanted to learn for six years and it just so happens that Zogaria plays and was able to teach him.

“It is a fantastic environment for the child, especially if they get a Big Brother while dad is deployed,” says Bryan’s mother Nicole Austin.  Having a mentor can “fill in a little bit of the void the child is feeling. I love the program. It gives him something to look forward to.  It gives him that older sibling interaction,” adds Austin.