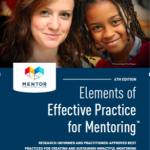 The Elements in the Room: Reflections on the new practice guideline

Last week, MENTOR released its much-anticipated 4th edition of the Elements of Effective Practice for Mentoring (EEPM). The “Elements” is a collection of research- and safety-informed practices for guiding the work of youth mentoring programs. This effort was led by Michael Garringer and Tammy Tai (MENTOR), Janis Kupersmidt and Rebecca Stelter (iRT) and Jean Rhodes (MENTOR/UMB Center for Evidence-Based Mentoring). We all worked hard on this effort, but the researchers at iRT really took on the lion’s share of research, writing, and revision. We are also indebted to our Advisory Committee for their assistance in reviewing and strengthening the Benchmarks and Enhancements, including Heather Clawson, Sue Ann Endelman, Janet Heubach, Celeste Janssen, Michael Karcher, Sarah Kremer, Kristin Romens, Sarah Schwartz, and Renee Spencer.

A brief history of the Elements

As Mike Garringer noted in the Elements preface, “there is perhaps nothing more impactful in our organizational history than the development and dissemination of the Elements of Effective Practice for Mentoring.” The EEPM has evolved considerably since the very first edition of the Elements was created in 1990, which was developed by a large committee of youth-serving organizations who were seeking to address the practice needs of the rapidly-expanding field. An expanded edition was released in 1999 and, 10 years later, MENTOR released the 3rd Edition.

The 3rd edition was a significant departure from previous versions. Instead of “consensus by committee” a small group of expert researchers and practitioners (led by MENTOR and Drs. Rhodes and Kupersmidt) grounded the entire document in peer-reviewed research that supported best practices. This resulted in a new framework, organized by Standards, Benchmarks, Enhancements, and Justifications.

The making of 4th Edition

The new 4th edition built on this framework, but it is a thorough update. It reflects the latest research in the field. And we mean thorough. After looking over more than 400 peer-reviewed journal articles, we narrowed in on over 80 that were most relevant. And, because research is not always directly applicable to practice, we vetted every word of it with our Advisory Committee and the nearly 100 practitioners and mentoring organizations who offered their life experiences at last year’s pre-Summit Short Course. The Elements were then distributed to MENTOR’s 28 State Partners for further input.

So, what’s new in the 4th Edition?

As mentioned, this edition is more of a revision than a complete reworking. In fact, five of the six Standards remain the same. But there are some notable improvements.

Expanding Matching: The Matching Standard was expanded to include initiation–those first, critical meetings and the specific practices that support the initial development of effective matches.

Expanded literature review: This time around, we also threw our net much wider, incorporating research beyond the narrow confines of the mentoring field. This is reflected most directly in the Recruitment Standard in which the broader literature on volunteerism and nonprofit organizations is incorporated.

Detailed justifications: This edition contains an even more detailed literature review, which provides the research and safety-focused justifications for each benchmark and enhancement. It was written, edited, and rewritten for clarity by iRT’s Drs. Kupersmidt, Stelter, and Malley, and MENTOR’s Garringer, each of which was reviewed by the broader team.

Parent/guardian involvement: Recommendations are made for providing parents and guardians with input at all stages of the mentoring relationship.

Attention to program policies and documentation: In the justification of each standard, we note that “Mentoring programs should have a comprehensive written plan for monitoring and supporting mentoring relationships that addresses all of the Benchmarks of this Standard.” This includes:

Expanded approaches: Based on new research, we incorporate recommendations regarding emerging evidence-based approaches, including youth-initiated mentoring.

Greater Emphasis on Evaluation: We recommend that programs evaluate their efforts and use findings to improve their program practices.

for you to both learn and implement the new required benchmarks and the recommended enhancements! You can contact MENTOR at http://www.mentoring.org/program_resources/national_mentoring_resource_center or Mentoring Central (mentoringcentral@irtinc.us) at www.mentoringcentral.net

The Science is Clear: Separating Families has Long-term Damaging Psychological and Health Consequences for Children, Families, and Communities
https://www.evidencebasedmentoring.org/wp-content/uploads/2015/09/elements.png 360 960 Jean Rhodes https://www.evidencebasedmentoring.org/wp-content/uploads/2018/08/chronicle-logo-1.png Jean Rhodes2015-09-30 18:57:512018-09-06 18:53:55The Elements in the Room: Reflections on the new practice guidelines

“Grit” is not a panacea for the problems facing disadvantaged youth