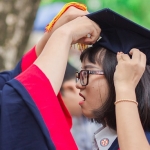 Back in November 2001, A. Janet Tomiyama joined a health psychology laboratory at the University of California, Los Angeles (UCLA). She took a job as an administrative assistant because she wanted to apply for a doctoral program and needed a way to get more research experience.

Tomiyama, who had majored in psychology as an undergraduate at Cornell University, had a lot of ideas about the interplay of culture, gender and eating disorders among young women. However, she wasn’t sure exactly what to do with her theories until she met Kathleen Hoffman Lambird, a graduate student then in her second year in UCLA’s clinical psychology program, who also worked in the lab. Over coffee, Lambird helped Tomiyama focus her ideas into questions she could explore.

“I had these ideas about culture and eating disorders, but she really helped me formulate those ideas into testable hypotheses,” says Tomiyama. “I think that’s the type thing you can’t learn from a book.”

With help from her informal mentor, Tomiyama designed a study to examine cultural factors in eating disorders among European American and Asian-American women.

“That, of course, really helped in terms of getting admitted to graduate school,” says Tomiyama, who has since helped organize a $100 peer-mentoring award through her school’s Psychology Graduate Student Association as a way to honor other students like Lambird. The inaugural award went to recent grad Adam Fingerhut, PhD, who joined the faculty of Loyola Marymount University in Los Angeles last year and was known at UCLA for his commitment to other students’ success.

Those who have already gained admittance to graduate school can also benefit from peer mentors, says Janice DeLucia–Waack, PhD, program director for the school counseling program at the University at Buffalo, State University of New York. That’s why psychology programs-including hers-are increasingly using a mix of formal and informal approaches to connect students for peer mentoring, with the goal of helping newer students adjust to the social and academic demands of graduate school.

Such mentoring can help students navigate the particular demands of their programs, students say. Professors say peer mentoring often provides new students a model for meeting the challenges of conducting research and writing a dissertation.

Peer mentoring is not a new idea. Back in 1987, in her first year teaching at Purdue University, DeLucia-Waack helped collect data on a peer-mentoring program where new doctoral students paired with more senior students at a picnic at the start of the academic year and were encouraged to keep in regular contact. At year’s end, students were surveyed about their mentoring experiences.

The results, published in Counselor Education and Supervision (Vol. 30, No. 1, pages 58-65), showed that among the mentor-mentee pairs who met three times or more, the mentees reported less trouble adjusting and more overall satisfaction with the program, DeLucia-Waack says.

That’s because mentors offered advice on a variety of topics, such as finding a place to live and which professors were standouts in teaching and advising, she says.

“Those are the type of things faculty can’t say, but students can have those conversations,” DeLucia-Waack says.

Inspired by that finding, DeLucia-Waack has since developed formal and informal mentoring programs for her department at Buffalo. For informal mentoring, she matches first-year students with second-year students in late May and early June before the academic year starts. The students are encouraged to e-mail each other before school starts, then they meet at a luncheon the first week of classes.

At school, students talk about topics such as how the shift to the graduate school culture is going, balancing the competing demands of family, work and school, and the best electives to take, DeLucia-Waack says.

“It really takes a lot of anxiety out of the process, because it breaks it down into concrete, manageable steps,” she says.

Students in the first four years of the five-year program meet for two hours every other week with their faculty adviser. Second-year students discuss possible study proposals, third-year students talk about collecting data, and fourth-year students share their experiences writing and preparing to defend dissertations.

“The encouragement they get from each other and the collaboration that develops just goes so much further than what I can offer them,” Campbell says.

A second opportunity for peer mentoring in a formal context comes during weekly meetings of clinical supervision teams. Each team includes students from the first to the fourth year undergoing training at counseling centers and community mental health programs.

“Students who are just beginning in practica and really not sure exactly what they’re doing have a chance to see students in their third and fourth year, who are developing pretty solid clinical skills,” Campbell says.

While students gain valuable guidance from others in their programs, they can look further afield-to professional associations–for peer mentoring.

In one session called “Works in Progress,” graduate students offered feedback to students having trouble turning an idea into a study.

Zachary Adams, a second-year clinical psychology student at the University of Kentucky, served as a conference co-chair.

“We thought it would be particularly helpful for those students coming up through the ranks, who may have ideas for projects but need help on the nuts and bolts or other conceptual areas to consider,” Adams says.

Other mentoring opportunities have opened up through groups such as the APAGS Committee on Lesbian, Gay, Bisexual and Transgender Concerns (CLGBTC), says Michelle Vaughan, PhD, chair of the committee.

APAGS launched the first of two annual rounds of the APAGS-CLGBTC Mentoring Program earlier this year, creating opportunities for LGBT graduate students and those interested in LGBT issues to match with a student or professional mentor who shares their interests and background.

A previous effort to set up a mentoring program tailored to the needs of LGBT students drew plenty of students who wanted to be mentored, but not enough volunteer mentors, Vaughan says. To draw more volunteers, APAGS-CLGBTC opened up mentoring to advanced graduate students who have completed at least three years of graduate study in psychology.

Psychologists and graduate students will advise more junior students on issues such as what it’s like to be “out” in academe and how to advocate for more inclusive research-ensuring that lesbian, gay, bisexual and transgender people are included as research participants in studies.

“I think what’s really great is there is now a larger group of out, socially involved LGBT graduate students, and they’re looking for ways to grow, and give back,” Vaughan says.