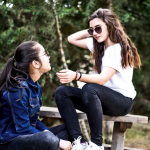 Older sisters can promote adolescent girls’ healthy romantic relationships based on their experiences through one-on-one conversations, a new study shows.

The findings suggest that sisters might be more comfortable and honest in conversations about sex and dating than they are with parents, other adults, and even friends.

“If parents want their daughters to have healthy relationships, they should encourage their daughters to talk to one another about sex and dating,” says Sarah Killoren, associate professor of human development and family science in the College of Human Environmental Sciences at the University of Missouri.

“Making certain topics taboo could be a disservice to young women as they navigate adolescence and relationships,” Killoren says.

Researchers examined the content of more than 60 pairs of sisters’ conversations to identify messages about dating. The average age for the older sisters was 19, while younger sisters were around 14 years old.

“Older sisters used their experiences and lessons learned from dating to try to help their younger sisters make good choices about dating partners and sexual relationships,” Killoren says. “In many cases, they focused on the negative aspects as a way to protect their sisters, talking about risks of unprotected sex and abusive relationships.”

During conversations about dating and sexuality, sisters talked with one another about the progression of relationships, partners, sex, and the importance of self-care. Many of the messages were consistent with societal views on adolescent sexuality—to avoid having sex until in an older, committed relationship and the negative consequences resulting from having sex as a teenager.

Further, the findings show that sisters can be good messengers on the importance of not ignoring other significant relationships while dating.

“Sister relationships are peer-like, but they also are involuntary, meaning that sisters don’t get to choose one another the same way they can choose their friends.” Killoren says. “Sisters can be honest with one another in a way that they can’t be with their friends.

“For example, an older sister can voice her disapproval about a younger sister’s boyfriend without necessarily severing the relationship with her sister. If a friend shared such concern, the younger sister could terminate the friendship as a result,” Killoren says.