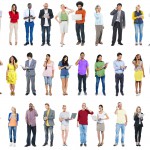 As the parent of a high school junior, I can’t help but worry about the impending college application process. I try to appear relaxed and good natured during the occasional moments that my son checks in with me, yet my mind is racing. “Yeah,” I casually agree, “Bradley Cooper really should win best actor.” All the while thought bubbles are frothing furiously above, “Have you begun studying for the March SAT?; Have you identified teachers to write your letters of recommendation; What about your essay?” The list goes on. But were I to broach such topics, Thomas would scurry back to his bedroom faster than a terrified rabbit to its den. Instead, like a growing number of parents, I find that the best way to reach him about deadlines and such is with a lighter touch——through texts. And, remarkably, we get a lot of business done that way. Stripped of my anxiety, and managed on his timescale, texts are a direct line of communication. In other words, with texts we can all be nudging parents without being (too) annoying.

Indeed, as our study Mentoring in the Digital Age revealed, mentors are increasingly experiencing the magic of texts for imparting information and advice about school, college deadlines, and career opportunities. That’s why an article by University of Michigan Professor, Susan Dynarski, in the New York Times about text nudges as an evidence-based means of closing the educational inequality gaps struck such a chord.

“Researchers have been quietly finding small, effective ways to improve education. They have identified behavioral “nudges” that prod students and their families to take small steps that can make big differences in learning. These measures are cheap, so schools or nonprofits could use them immediately.

While they were graduate students at Harvard, two young professors designed and tested a program to help students stick to their college plans. Benjamin L. Castleman, now at the University of Virginia, and Lindsay C. Page, at the University of Pittsburgh, set up a system of automatic, personalized text messages that reminded high school students about their college deadlines. The texts included links to required forms and live counselors.

The result? Students who received the texts were more likely to enroll in college: 70 percent, compared with 63 percent of those who did not get them. Seven percentage points is a big increase in this field, similar to the gains produced by scholarships that cost thousands of dollars. Yet this program cost only $7 per student.

The same researchers also tested a texting program to keep students from dropping out of college. The problem is important because the graduation rate of low-income college students is dismally low; two-thirds leave without a degree. Community college students received texts reminding them to complete their re-enrollment forms, particularly aid applications. Among freshmen who received the texts, 68 percent went on to complete their sophomore year, compared with 54 percent of those who got no nudges. This, too, is a big impact — especially for a program that cost only $5 per student.

We know these programs worked because they were evaluated, like all the innovations cited in this column, using a randomized, controlled trial. Randomized trials, once rare in education research, are increasingly common. The What Works Clearinghouse, which reviews and rates the quality of education research, lists 242 randomized trials. Students were randomly assigned to receive texts or not receive them. Because the two groups were randomly defined, they were basically indistinguishable at the start of the study. They diverged as the texts altered the behavior of those who got them compared with those who did not.

Text messaging won’t help everyone get through college, and cheap interventions won’t solve every problem. But they solve some problems for some students, freeing up time and financial resources for those who need other kinds of help….These light nudges can’t solve every problem, by a long shot. But at a low cost, they can help many students.”

Mentors can play a lot of roles in the lives of their mentees: models of success, friends, confidants, and — it seems –nudgers who (in a relatively light and simple way) can help ensure a more promising future for the students in their lives.