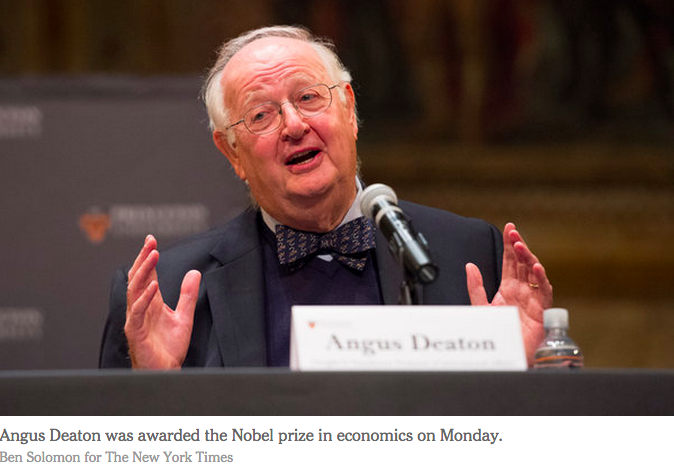 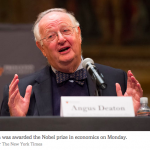 By the New York Times Editorial Board

Angus Deaton, this year’s winner of the Nobel in economic science, was honored for his rigorous and innovative use of data — including the collection and use of new surveys on individuals’ choices and behaviors — to measure living standards and guide policy.

Reliable data is essential for policy makers. But for years, Congress has cut, frozen or shortchanged the budgets of most of the nation’s 13 main statistical agencies.

House Republicans, for example, have been especially scornful of the decennial census, the nation’s most important statistical tool, and the related questionnaire, the American Community Survey. They have placed prohibitive constraints on the Census Bureau, including a mandate that it spend no more on the 2020 census than it spent on the 2010 census, despite inflation, population growth and technological change.

Republicans have also proposed making the community survey voluntary — a move that would diminish the survey’s value by condoning nonparticipation, which increases cost and reduces accuracy. Even if the proposals go nowhere, the noise generated by their supporters is enough to persuade some people not to participate.

The census is not the only target. The budget for the Bureau of Labor Statistics has been flat or falling for several years, forcing the agency to end surveys on mass layoffs, international labor comparisons, and employment in alternative energy. It has had to curtail quarterly data collection on employment and wages.

Unless the labor bureau’s budget is increased, even the American Time Use Survey — the only government survey of how Americans spend their time outside work — may be curtailed or ended. The time-use survey, which was begun in 2003, provides the type of novel data Mr. Deaton used in his research.

The list of cutbacks goes on. Budgets to compile statistics on the economy, energy and health have failed to keep pace with inflation since 2010, while budgets for statistical efforts covering agriculture, crime, education and transportation are lower in real terms now than they were five years ago.

Angus Deaton was awarded the Nobel prize in economics on Monday. Credit Ben Solomon for The New York Times