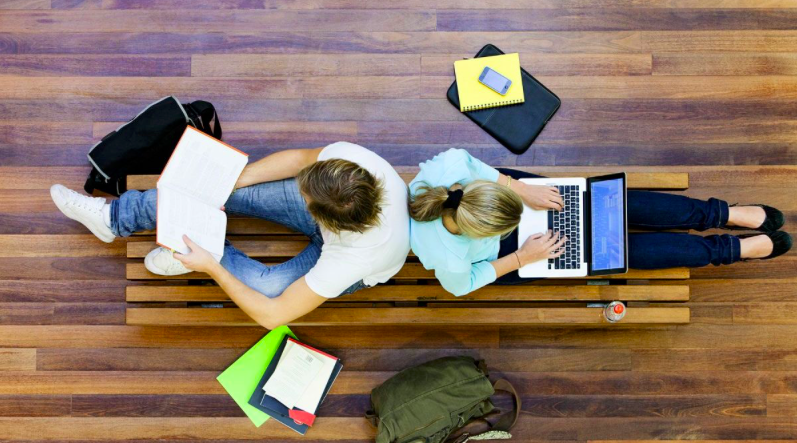 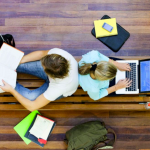 A new Elon University Poll finds of more than 4,000 college graduates finds that building relationships is key to positive perceptions of the undergraduate experience.

College graduates are significantly more likely to describe their undergraduate experience as rewarding when they have multiple meaningful relationships with faculty and staff during their time in school, a new Elon University Poll has found. Thousands of graduates responding to the survey also said that friendships with their peers made their college years as “very rewarding,”

The results of this most recent survey by the Elon Poll comes at a time when thousands of new college and university students are arriving on campuses and beginning their higher education. The Elon Poll examined how the relationships students develop impact their opinions about the quality of their college experience.

Accompanying the release of the Elon Poll survey results is the publication of an article examining the impact of peer and mentor relationships on the college experience by Elon University President Emeritus Leo M. Lambert, Assistant Provost Peter Felten, the director of the Center for Engaged Learning, and Elon Poll Director Jason Husser.

“Some might find it obvious that making friends and finding mentors is important in getting the most of out the college experience,” said Husser, an associate professor of political science. “However, our survey shows that millions of Americans could have a much richer undergraduate education if they would intentionally cultivate a network of peers, faculty and university staff.”

The poll found that among those who built strong bonds with faculty or staff members while in college, nearly two-thirds began those relationships during their first year in school. The same held true for those close friendships that developed in college, with 79 percent saying that they first got to know their closest friend in college during that first year. 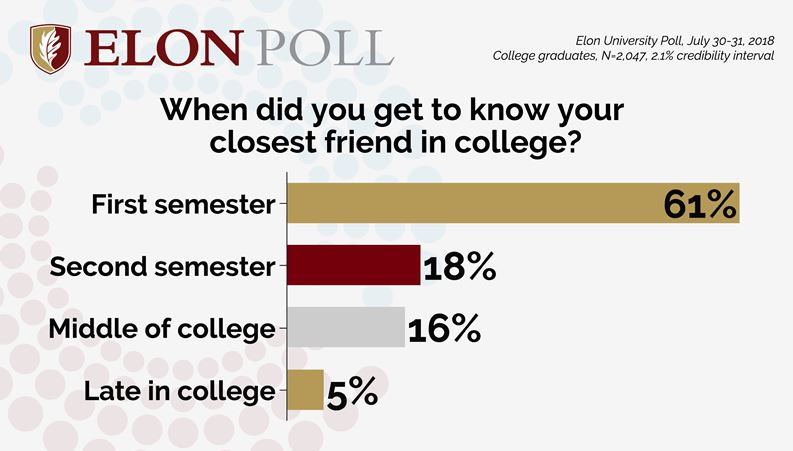 The online survey of 4,006 adult residents with bachelor’s degrees or higher from around the country was conducted July 30-31, 2018. For the survey, the Elon Poll used an online opt-in sample, with respondents receiving small amounts of compensation in exchange for their opinions. Of the 4,006 surveyed, 2,047 were asked the questions regarding peer relationships and 1,959 were asked the questions about faculty-staff relationships.

The survey was conducted in collaboration with the Center for Engaged Learning at Elon University. The poll’s complete methodology, including credibility intervals for the survey by metro, is available within the full report.

The more relationships, the better

The survey found a correlation between graduates’ overall opinion of the college experience and the number of relationships they had with faculty and staff members while in school. The more such relationships students had when in school, the more fondly they recalled their overall experience. 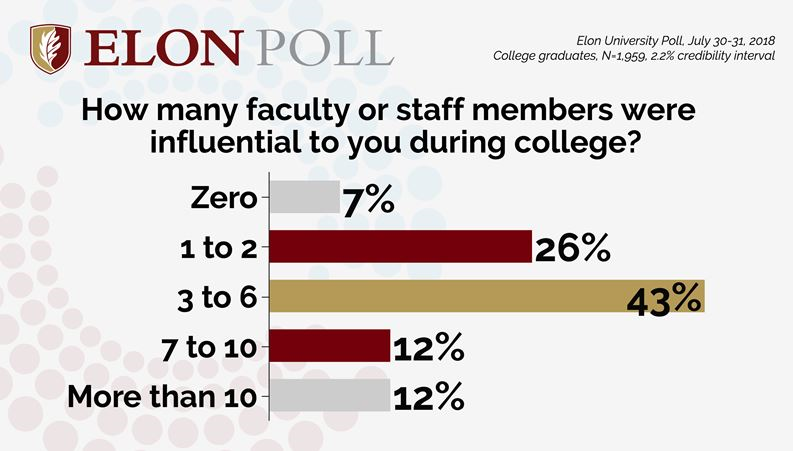 Among those reporting they had no close faculty or staff relationships, 10 percent said college was “not rewarding at all,” compared to the 1 percent who had that view overall. 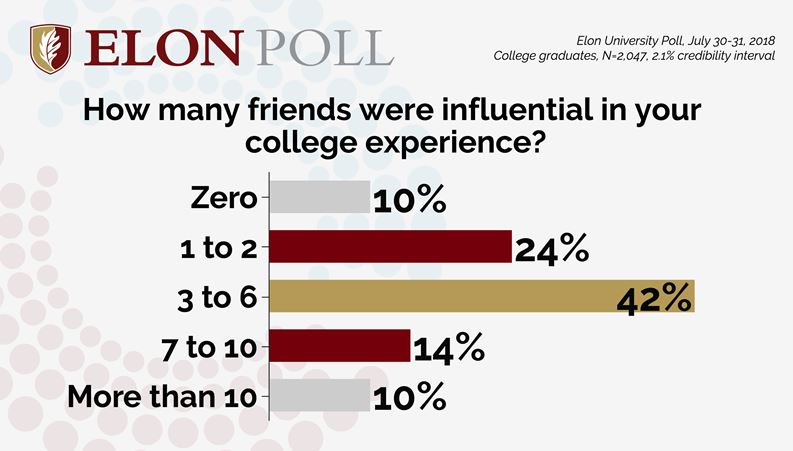 The same trend held true when it came to saying whether college was a worthwhile investment. The more close friends a graduate reported, the more likely they were to say that the money and time spent and the benefits they received from the college experience were worth the investment.

When and where students found mentors, friends 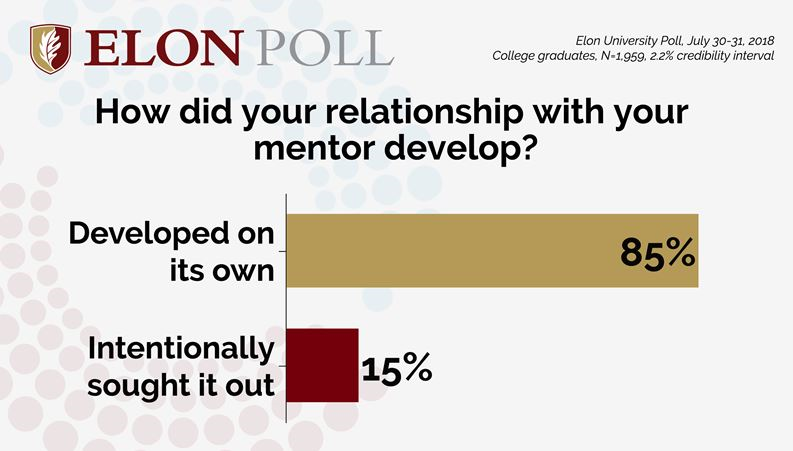 “We found the early semesters in college to be critical for developing relationships that support long-term learning and career outcomes,” Husser said. “This provides clear evidence in support of advice many students entering college this fall will hear- take advantage of your first year to get to know professors and friends. Forming academic connections with only a few key people can make a tremendous positive difference.”

Turning to their closest friend, 87 percent said that that relationship was “very” or “extremely” important to their overall college experience. A close friend was much less likely to serve as a mentor than a faculty or staff member, with 53 percent saying a close friend fell into that role. 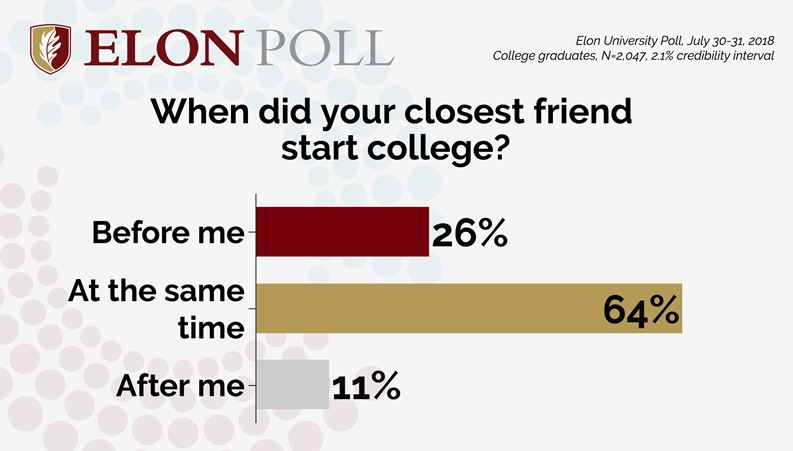 Those surveyed were much more likely to stay in touch with closest friend after college (87 percent) than those faculty or staff members they were closest with (55 percent).

Time and trust trump all: An examination of social capital, race and class in mentoring relationships