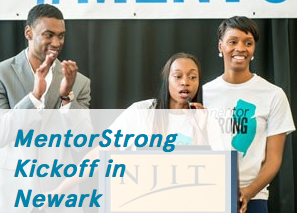 MENTOR has begun an exciting partnership with Pivot TV, a new cable television network that targets talented and passionate 18 to 34 year old Millennials, to encourage viewers to explore mentoring programs as part of a year-long social action initiative on the channel’s new hit docu-series, “Jersey Strong”.

The original reality show Jersey Strong, about a young couple in Newark striving to make a better life for their family, airs Saturdays at 10:30 pm EST.

Mentoring is a touchstone of the “Jersey Strong” storyline. Two of the show’s lead cast members, Jayda and Creep, are reformed gang members of the Bloods and Crips, respectively, who have become active mentors in their community. The series, which premiered to critical acclaim on Sept. 14, chronicles the lives of two families from parallel universes – the street and the executive suite.

MENTOR, the lead champion for youth mentoring in the United States for more than 20 years, and its affiliate, Newark Mentoring Movement (NMM), have partnered for the “MentorStrong” campaign on “Jersey Strong” in order to increase awareness about the importance of mentoring as a means of intervention with at-risk youth. The “Jersey Strong” show’s premiere launched a nationwide mentor recruitment initiative.

Pivot’s “MentorStrong” campaign officially kicked off on Sept. 30 at a mentor recruitment event at the New Jersey Institute of Technology (NJIT), which celebrated the approximately 800 currently active Newark mentors registered through the Newark Mentoring Movement.

MENTOR has partnered with Pivot TV to link the Volunteer Referral System to the campaign website and promote the campaign on social media. Be on the lookout for social media messages from @MENTORnational and ways to join the effort to promote this social action campaign.

Pivot TV, a new venture of Participant Media, offers a mix of original series, acquired programming, films and documentaries aimed toward viewers who fit into the 18-34 age group. Pivot focuses on entertainment that sparks conversation, inspires change and illuminates issues through engaging content. Its website, TakePart.com, allows viewers to continue the conversation and connect audiences to a wealth of content and customizable actions.