My colleagues and I began conducting meta-analyses of youth mentoring programs around five years ago and we can’t seem to stop. Like compulsive gold miners, we find ourselves returning to this method, again and again, hoping to uncover yet another helpful nugget. A meta-analysis combines the results of multiple evaluations to determine the overall effectiveness of an intervention strategy  (e.g., mentoring programs) and to estimate and compare effects across different approaches or populations. Meta-analysis is not a perfect barometer–effects are often calculated from very different types of programs and the ability to make comparisons depends on the information provided in the original evaluations. Nonetheless, this approach can shed important light on practices and approaches that might be most helpful to the field. In fact, some methodologists place meta-analysis at the top of the evidence pyramid. Given their potential contribution, my colleagues and I have been on a bit of a meta-analysis kick these past few years.

It all began with a comprehensive meta-analysis, led by Professor Liz Raposa. This study encompassed 70 intergenerational, one-on-one mentoring program evaluations that were conducted from 1975 through 2017, and represented more than 25,000 youth. We found that mentoring programs were associated with a range of significant, but, overall, small effects. In fact, the overall effect (g = 0.21) continued a modest trend line of meta-analyses in this field that has not markedly improved in nearly 20 years.  Clearly, there was more work to be done.

As a follow-up, we drew on the Raposa et al. data set to explore programs that took a non-specific, friendship-based approach versus a targeted, problem-specific approach to mentoring. When the type of program was examined, targeted and more problem-specific programs had an average effect size of 0.25, which was more than double the average effect size of non-specific, friendship-based programs (g = 0.11) and for some outcomes triple the average effect size.  These findings are in line with recent calls from mentoring researchers for stronger alignment with theoretical and evidentiary standards of prevention science (e.g., Cavell & Elledge, 2015). 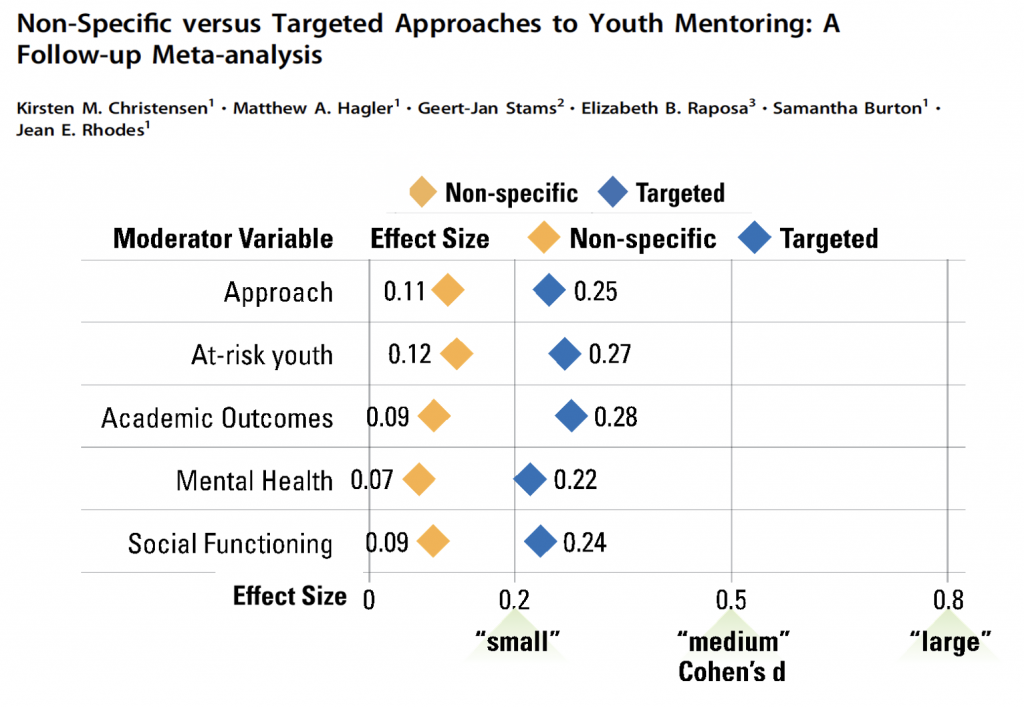 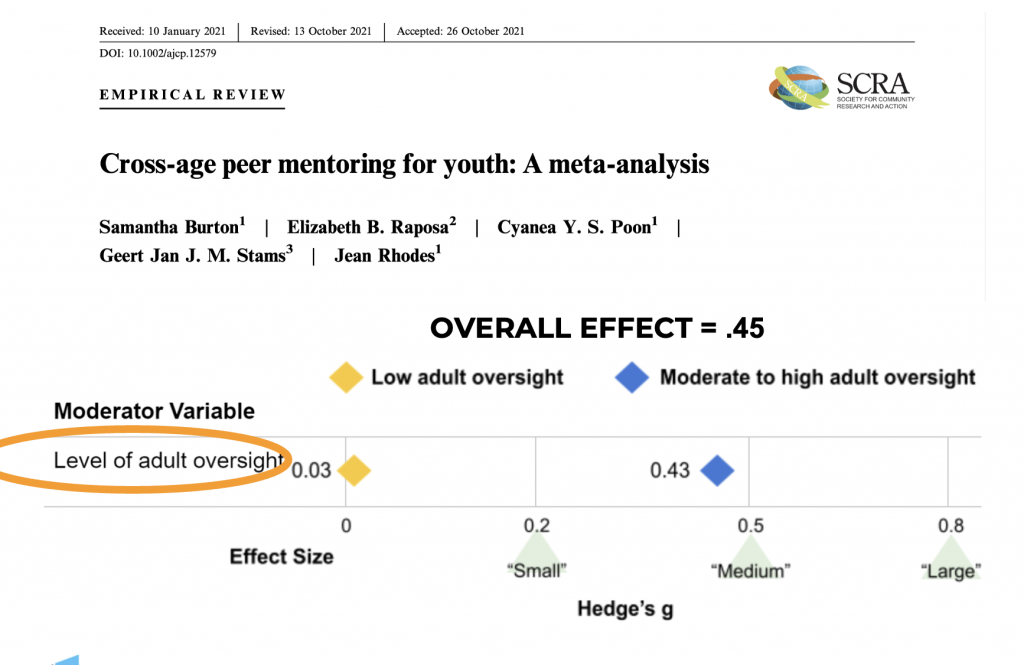 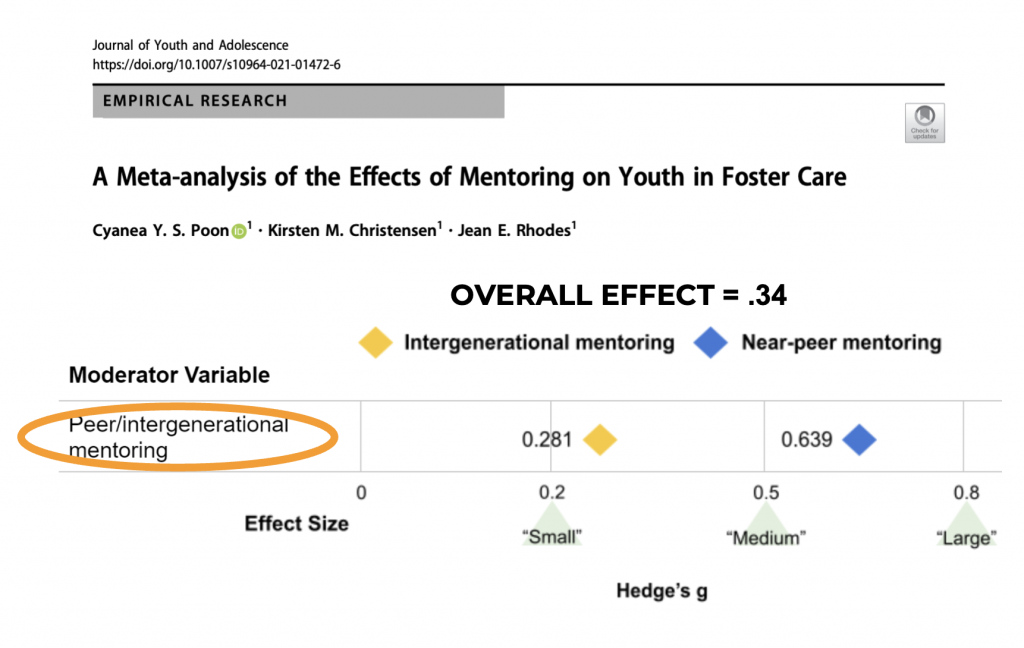 Finally, we conducted a meta-analysis of youth-initiated mentoring (YIM), a hybrid approach in which youth and their families are helped to identify and recruit caring adult mentors from within their existing social networks and to maintain such relationships, which is a promising strategy for addressing these problems and expanding the reach of youth mentoring. The study revealed that, across a range of outcomes, overall effects were slightly higher (g = 0.30) than those achieved in formal mentoring.

Overall, our studies have produced a range of effects–with traditional, intergenerational, nonspecific mentoring programs leaving the most room for improvement. 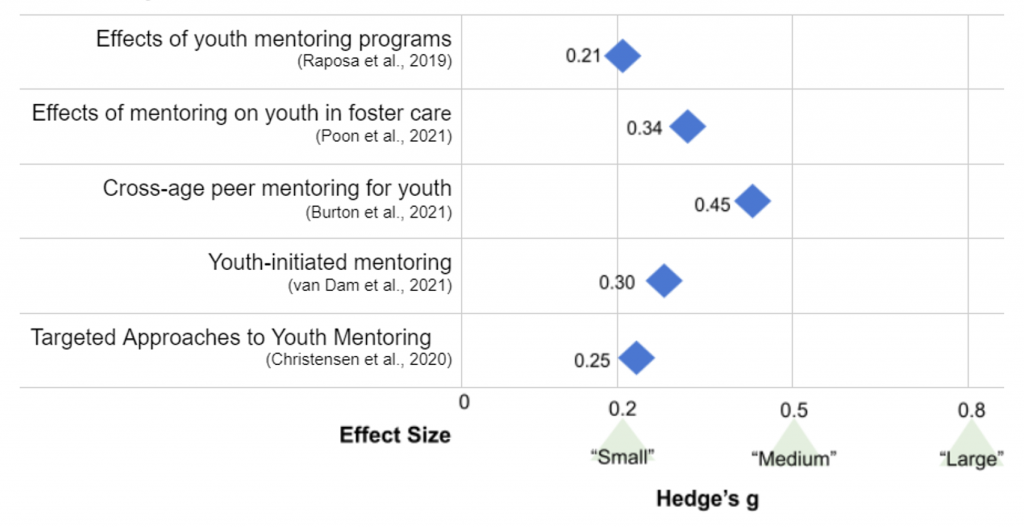 After completing the first major meta-analysis of youth mentoring,  DuBois et al. observed that the reality of mentoring programs was “not necessarily consistent with the manner in which results of the large-scale evaluation frequently have been cited by the media as demonstrating a large impact for mentoring relationships.” Nearly 20 years later, the findings from the 2019 meta-analysis led Raposa et al. to call for “more rigorous adherence to evidence-based practices that target specific mechanisms underlying particular youth difficulties, rather than relying on a relatively low-intensity, nonspecific approach with uneven adherence to practices that are research-informed.”

Together the subsequent meta-analyses have reinforced these recommendations, suggesting that stronger mentoring effects may result from programs that:

We are continuing our quest! (expect a meta-analysis on group mentoring from us soon!). Over time, each a new set of findings fits more logically into the broader mentoring landscape and suggests new solutions to the field.

Grabbing the fourth cookie: On luck, entitlement, and mentors