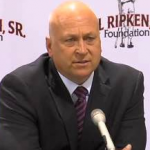 Cal Ripken Jr., known as baseball’s all-time Iron Man playing 21 seasons with the Baltimore Orioles and earning a record-breaking career, will be the featured opening speaker at the 2014 National Mentoring Summit.

Ripken Jr. was powerful at the plate, graceful in the field, and had unrivaled perseverance. He earned American League Rookie of the Year honors in 1982, won the MVP award in 1983 and 1991, and received a Gold Glove in 1991 and 1992. He broke Lou Gehrig’s major league record for consecutive games played (2,130) in 1995. Ripken Jr.’s career included 3,184 hits, including 431 home runs, and the record for most home runs by a shortstop and highest single season fielding percentage by a shortstop.

Since retiring from baseball in 2001 he has focused the same energy and commitment that drove his major league career into philanthropic programs that help teach critical life lessons and bring real opportunity to young people in distressed communities.
The value of mentoring is core to Cal Ripken Jr.’s success and his philanthropic philosophy. Through the Cal Ripken Sr. Foundation, named in honor of his father – also a baseball player and long-time coach and mentor in professional baseball – his work has connected thousands of young people to caring adults in their communities.

Register now and don’t miss the opportunity to hear from a sports legend and champion for our young people!

Learn more about the 2014 National Mentoring Summit at www.mentoring.org/summit.