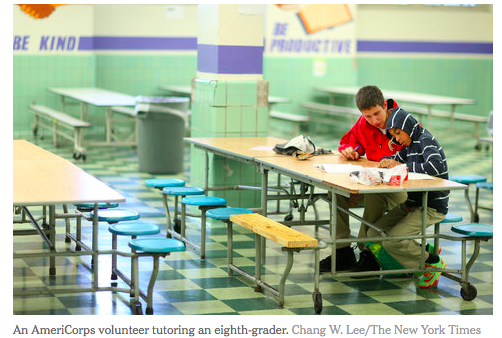 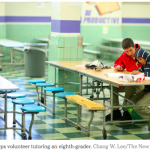 Like so much gone awry in Washington of late, the failure to expand AmeriCorps, the nation’s main public service program, is largely the fault of the right-wing Republicans who now control the House and keep approving extreme budget resolutions calling for the program’s elimination.

As we explained in a Sunday editorial, President Obama in 2009 signed into law the Edward M. Kennedy Serve America Act, which “called for increasing AmeriCorps positions in stages to 250,000 by 2017.” Although the law had bi-partisan support, the ramp-up has not occurred.

One of the most galling aspects of this disheartening situation is the duplicity of those G.O.P. lawmakers who are well aware of the good work being done by AmeriCorps participants but nevertheless shrink from voicing public objection when their colleagues put AmeriCorps on the chopping block.

A prominent case in point is Representative Harold Rogers, the Kentucky Republican who chairs the House Appropriations Committee.  In May, Mr. Rogers issued a press release to announce (and presumably get credit) for the awarding of $959,000 in competitive grants to field 120 AmeriCorps members working with non-profit groups in his district to improve schools and student outcomes.

“AmeriCorps members are an indispensible resource,” he stated, noting their role in helping Kentucky students “improve their test scores, make healthier choices about food and exercise” and mentoring “thousands of students from broken homes.” He thanked “all those who have answered the call to service by joining AmeriCorps.”

Similarly, in July, Mr. Rogers was there to have his picture taken when Wendy Spencer, the C.E.O. of the Corporation for National and Community Service, which oversees AmeriCorps, announced the deployment of 52 full-time members to support a new initiative to improve the economy and quality of life in Appalachian Kentucky.

“This new investment builds upon the great work that the Corporation for National and Community Service already offers to teachers and student in our region, by offering additional resources to enhance economic opportunity for the people of eastern Kentucky,” Mr. Rogers said.

He also praised the overlapping missions of the initiative and national service “to tap the energy of local citizens to solve problems.”

Mr. Rogers’ favorable words for AmeriCorps seem sincere.  And his support behind the scenes may be a reason why past budget deals between the Republican-led House and Democratic-led Senate have allowed AmeriCorps to remain at its current strength of around 80,000 participants.

Just think, though, how much more Kentucky and the rest of the country could benefit if Mr. Rogers would use his powerful berth as House Appropriations chairman to spread the word about AmeriCorps’ value to his Republican colleagues and join a reinvigorated push by President Obama for the program’s growth. 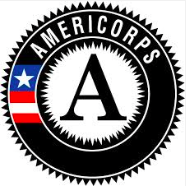 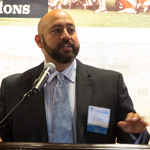