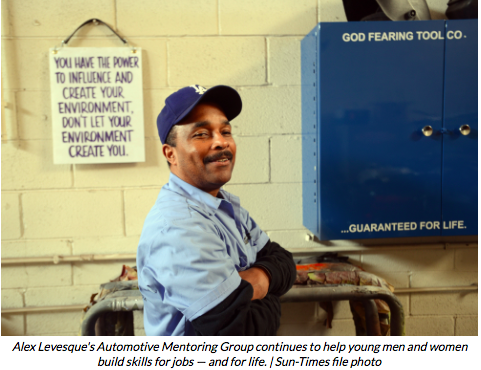 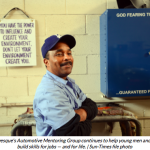 A lot of people already know that Alex Levesque’s Automotive Mentoring Group — AMG for short — in Bedford Park is a successful mentoring program.

Full-page articles from respected local and national publications grace the walls of the auto shop, as do civic awards that have been bestowed by a variety of organizations.

In fact, next week, the “Steve Harvey Show,” will honor Leveseque as one of its hometown heroes.

But the miracle of AMG doesn’t really sink in until you visit the auto shop.

What you will see are classic autos that have been so meticulously restored, it is hard to believe the work was done by young men who used to stand on street corners gang-banging, drug-slinging, and getting high.

Shareef, 17, (I’m withholding his last name because of his gang ties) used to be one of them.

He has been kicked out of three high schools, the last one for missing too many days. When the Juvenile Justice Initiative, “Bridges to Pathways” offered him the opportunity to attend the AMG program, he jumped at the chance.

“I was not doing good. Roaming the streets, outside just trying to gang bang and all of that stupid stuff,” he told me.

“If I wasn’t here, I would still be outside hanging out on the block and not going to school. Now I go to my program. Come to work. Go home. I am trying to stay on the right path that I am on so I won’t end up in jail or dead,” he said.

Between 18 and 22 young men (there are now three young women working on cars as well) are enrolled in the six-month program.

They each receive a certificate when they complete the course and get help trying to find jobs.

“If they do everything that we ask them to do. If they go back to school and they get their high school diploma; if they enroll in any of the five community colleges that we have relationships with that have excellent automotive programs; if they are successful on the job that we give them because we have 24 hiring partners and they’ve done all that, we give them a car,” Levesque said.

“They are always surprised because as far as they know when the cars come in these are customers’ cars. Last year, we gave away 13 cars,” he said.

Levesque said he had been angry for a couple of years about the young men hanging on the street corners when he was prompted by the Holy Spirit to do something.

“I didn’t hear a voice or anything. It was just a thought that said: ‘What about you, son? Use what I gave you,’” Levesque said.

An architect at the time, he quit his good-paying job, sold his Porsche, and founded AMG in the 1990s. The business became a 501(c)3 charitable organization in 2012.

There are currently three auto shops, including a paint shop. Mentors include police officers and firefighters who have a passion for classic cars.

Most of the group’s funding comes from individual donations and foundations.

“We provide the uniforms, including the steel-toe boots, Levesque said.

He and other mentors used to show up in the Englewood, South Shore, Back of the Yards, Humboldt Park and Austin neighborhoods driving restored classic cars, looking for young gang members.

“The guys are looking at the cars, listening to the motor so we got about three minutes to get the story in before they start shooting,” he said.

But now, the group gets referrals from Juvenile Justice, Illinois Department of Juvenile Probation, the Illinois State Police, and the Chicago Police Department.

Despite the funding challenges, Levesque keeps heeding the voice that put him on this mission in the first place.

Decorated veteran talks about new role in supporting the next generation