In addition to vacation photos and cat videos, people also share details about their personal lives and feelings on Facebook—including occasional posts about despair and even thoughts of suicide.

As the world’s biggest social network, with more than 1.39 billion users, Facebook is uniquely able to provide online resources and support to help suicidal people.

That’s the goal of a new collaboration between Facebook and researchers at Forefront: Innovations in Suicide Prevention, an organization based in the University of Washington’s School of Social Work.

Working with an organization called Forefront: Innovations in Suicide Prevention and other mental health experts, Facebook enhanced its suite of tools to support suicidal people and tell those who see and report suicidal posts on Facebook how they can help.

That reporting activates a series of responses. The person who flags the post will see a screen with links that allow them to send a message to the potentially suicidal person, contact another Facebook friend for support, or connect with a trained professional at a suicide helpline for guidance.

Facebook will then review the reported post. If the poster is thought to be in distress, a series of screens will automatically launch when that person next logs onto Facebook, with suggestions for getting help.

The responses link to a number of positive options, including videos from Now Matters Now, an online program started by Forefront research scientist Ursula Whiteside that uses real-life accounts of people who have struggled with suicidal thoughts to provide research-based coping strategies.

‘JUST NOT SOMETHING WE TALK ABOUT’

The tools aim to both direct suicidal people to resources and alternatives and also to guide concerned friends or family members through a situation most are simply not equipped to handle.

“Often, friends and family who are the observers in this situation don’t know what to do,” says Holly Hetherington, a Facebook content strategist working on the project.

“They’re concerned, but they’re worried about saying the wrong thing or somehow making it worse. Socially, mental illness and thoughts about suicide are just not something we talk about.”

Stephen Paul Miller knows that all too well. Now Forefront’s operations manager, Miller lost a friend and college classmate to suicide five years ago. One night, Miller noticed a Facebook post from his friend saying that things were too much, that he couldn’t take it anymore. Alarmed, Miller resolved to call his friend in the morning. He died that night.

“The thing that breaks my heart the most about this is that I think it was just episodic. I don’t think he wanted to die,” Miller says. “But I was not trained. I did not know what to do.”

For immediate, confidential help from a trained counselor for yourself or someone you know, call the Suicide Prevention Lifeline at 1-800-273-TALK (8255).

The initiative began after a summit Facebook hosted about a year ago to discuss how technology companies could most effectively combat suicide. Facebook was already working with researchers on promoting compassion and preventing online bullying, and wanted to do something similar around suicide prevention.

“We realized there’s a lot we don’t know. We are by no means experts in this space,” says Jennifer Guadagno, a Facebook researcher.

So Guadagno reached out to Jennifer Stuber, an associate professor of social work at University of Washington who started Forefront after her husband died by suicide in 2011.

Teams from Facebook and Forefront began working together last fall, starting with discussions that defined and framed the issue. The conversations included suicide attempt survivors from the Now Matters Now project, who were instrumental in helping Facebook understand the spectrum of suicidal thoughts and how language commonly used around suicide can be insensitive—for example, saying someone “commits” suicide, the same term used for carrying out a crime.

KNOWING WHAT TO DO

Whiteside, who has herself struggled with suicidal thoughts, says when family or friends express fear or judgment to a suicidal person, they can unwittingly increase an already overwhelming sense of aloneness.

“People just don’t know what to do, and why would they?” she says. “As a society, we really need support in knowing how to respond to someone who’s suffering, and our work with Facebook is a first step.”

Stuber says Facebook has an opportunity to increase social media’s value as a force for good.

“In the world of suicide prevention, we know that being connected is a protective factor,” she says. “People are on Facebook 24/7, so there’s an opportunity to actually connect a suicidal person with someone they have a relationship with.”

One advantage of the Facebook tools, Miller says, is that they can be used by anyone: a concerned friend like him, a grandparent, a colleague.

“You don’t need to have a degree to be able to meet somebody where they are in their pain and connect them to a resource,” he says.

“You just need to know that there’s somebody who can help you facilitate that connection, and that’s what the Facebook project has the ability to do. This has the potential to save so many lives.

The effort was announced at the fifth annual Compassion Research Day at Facebook’s headquarters in Menlo Park, California, on February 25.

Slow Ideas and the power of mentoring 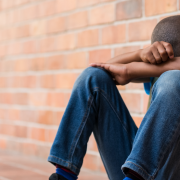 Bullying and its effect on mental and physical health for Jamaican teens, and how parents might be able to help