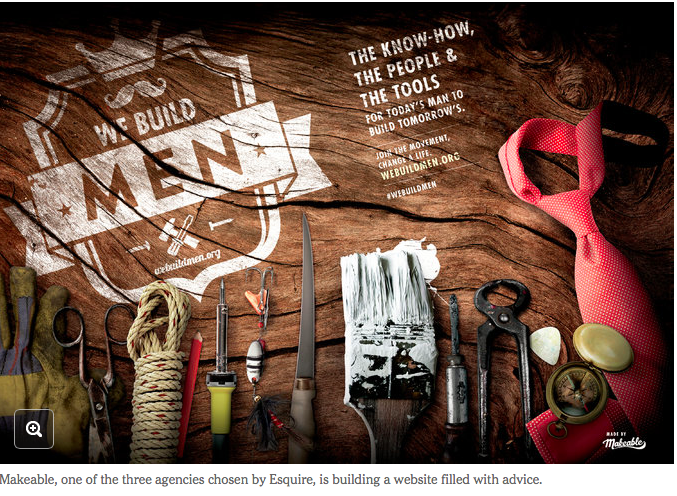 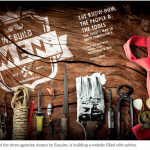 ESQUIRE magazine is teaming up again with Madison Avenue for a new cause-marketing initiative, seeking to encourage more adult men to mentor boys and young men.

The initiative comes eight years after a collaboration between the magazine and an up-and-coming agency to raise money for clean drinking water in the third world. That effort proved successful enough to become a permanent Unicef fund-raising program — and helped the agency become better known.

This time, Esquire has recruited three agencies deemed on the cutting edge of creativity to produce multimedia campaigns to demonstrate how valuable mentors are to youth and the benefits to the mentors of helping out. The initiative begins with the October issue of Esquire, now making its way to newsstands and subscribers.

In addition to the 30 or so pages in the issue devoted to mentoring — focused on the theme “Who made you the man you are today?” — Esquire is creating content online and working with a social publisher called RebelMouse to invite readers to share their mentoring experiences through videos, photographs and posts on platforms like Facebook and Instagram.

Esquire also plans to promote the initiative on the Esquire Network cable channel, a unit of NBCUniversal, and to involve other magazines like Popular Mechanics that are also part of Hearst Magazines.

The goal of the initiative, which includes a partnership with a national mentoring organization, Mentor, is to enlist 100,000 men as mentors by 2020.

“We’ve been concerned about the state of boys and young men, covering the way the education system and the criminal justice system fail them,” said David M. Granger, editor in chief of Esquire, which is based in New York.

“As we’ve talked to experts, we’ve found one consistent path to success is a relationship with a strong male role model,” he added, “so there’s a need for men, the next generation of mentors, to get interested in the idea of mentorship,” and a need to make it easier for them to volunteer.

To increase the appeal of mentorship to men in their 20s and 30s, “we wanted to make the idea more ‘sexy,’ ” Mr. Granger said, and make the word “mentor” seem less fusty.

Just as Esquire sought out the New York agency Droga5 in 2006 to create the effort to improve access to drinking water — originally known as the Tap Project and since rebranded as the Unicef Tap Project — the magazine decided to ask three agencies to develop campaigns to put more men into mentoring.

The intent was to find agencies that are filled with potential the way the now well-known Droga5 was eight years ago, said Richard Dorment, a senior editor at Esquire.

“When we worked with Droga5, it was before they were Droga5,” he said, laughing.

Gerry Graf, the agency’s founder and chief creative officer, said: “I was pretty excited when they contacted us. I have, I think, three subscriptions to magazines, and Esquire is one of them.”

The campaign was developed by approaching the issue as “a standard marketing problem,” he said, adding: “How do you get people to try something? Give them something back. We thought, if you’re a mentor, there’ll be less reason for jury duty.”

The work by Makeable is focused on webuildmen.org, a website now under construction, offering potential mentors what the home page calls “the know-how, the people and the tools for today’s man to build tomorrow’s.”

Michael Kantrow, a co-founder of Makeable with Tom Ajello, said: “We’re all very busy. So we thought, let’s help guys figure out this mentoring thing in today’s world by giving them a tool kit, a platform we call the beginning of a community that would appeal to contemporary men.”

The campaign by 72andSunny, part of MDC Partners, suggests that by mentoring, men can have fun, tapping into their inner boys with their mentees, while doing something important. The ads use a censored version of a vulgarism in offering a phrase mentors can say when questioned about what they are doing; the expression is something like “Back off, I’m helping.”

The variation on the vulgarism is “not just glib,” said Matt Jarvis, partner and chief strategy officer of 72andSunny, but part of the agency’s attempt to “bring a populist sensibility” to mentorship and make it more accessible to more people.

“Our insight was that mentorship has an earnest, worthy sensibility to it, so much so that a lot of men feel they don’t qualify to be mentors,” Mr. Jarvis said. “So we say, ‘You don’t have to read Shakespeare together, you can eat hamburgers together, jump off a high-dive together.’ ”

Mr. Dorment and Mr. Granger said they intended to devote pages of the November and December issues of Esquire as part of plans to keep the initiative going into next year.

Esquire is not the only brand seeking to bolster the ranks of male mentors. The Dove Men-Plus Care line of antiperspirants and deodorants sold by Unilever is starting a campaign centered on mentoring through youth football.

Reprinted from New York Times. A version of this article appears in print on September 12, 2014, on page B8 of the New York edition with the headline: Esquire Partners With 3 Agencies to Promote Male Mentorship.