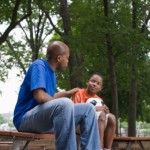 School-based mentoring programs are one of the fastest growing types of mentoring programs across the United States, but previous research suggests that its impact on academic, behavioral, and psychosocial outcomes is very small. Other studies suggest moderate positive and negative impacts. There are many reasons why these effects may be occurring, namely that short-term interventions and the constraints of the school environment (summer breaks, scheduling conflicts) make it difficult for student mentees and their mentors to form long-lasting, close-knit bonds that produce the positive outcomes we see occurring in community based mentoring organizations like Big Brother Big Sister. In the current study, the researchers designed a mentoring intervention specifically targeted to help middle school students achieve school-related goals.

The researchers randomly assigned students to either the treatment group (N=74) or a control group (N=60), and surveyed each group of students before and after the intervention took place. The intervention had each mentor meet with a single mentee eight times for 45 minutes a piece. Mentors were supervised by a group of graduate students in clinical psychology, as well as advanced undergraduate psychology and education majors. The mentors met “proactively” with supervisors on site before each mentoring session to check in, and supervisors were also available to mentors on an as-needed basis.

Potential mentees were recruited from a group of 6th and 7th graders at a large, urban middle school in southeastern United States. A total of 134 students and their parents agreed to participate in the study. 53% of the students identified as male, 62% identified as African American, 30% identified as Caucasian, and 8% were from other racial/ethnic backgrounds or did not know. The average age of the participants was 11.9 years old. Mentees who were assigned to the treatment group were matched with mentors based on common interests. All mentors were matched with a single mentee.
The mentors in this study were 74 first year undergraduates recruited from a program for academically gifted first and second year college students at the University of South Carolina. 81% of the mentors were female, 89% were Caucasian, 3% were African American, and 8% were from other racial groups. The average mentor age was 18. Mentors were trained in two in person 45 minute sessions prior to the intervention along with three 10 minute video trainings, and were provided with support throughout the intervention from the supervisors.

The researchers compared students’ grades from the first quarter to those in the second quarter of the school year to assess the intervention’s efficacy at helping students to improve their grades. The researchers also compared the number of office referrals for disciplinary problems in the same time period, along with tardiness, and absences to determine the effects of the program on school-related behavior problems. The researchers also administered a modified version of Karcher’s 2004 Hemingway: Measure of Adolescent Connectedness (specifically, they used the connectedness to school and teachers subscales), as well as Huebner’s 1991 Student’s Life Satisfaction Scale to determine how connected students were to school, and how satisfied they were with their lives, respectively.

The researchers also conducted measures of fidelity to the intervention’s manual by monitoring mentors’ ability to follow the tenets of the program and achieve goals for specific sessions. At the end of the study 91% of the sample received the full dosage of the intervention.
Results

The researchers found that there was a statistically significant relationship between being assigned to the treatment group and higher math grades, but grades in other subjects (reading, science, English language arts) did not reach significance. The researchers also found that students in the intervention group expressed significantly higher life satisfaction than their waitlisted peers, however, connectedness to school and teachers did not reach statistical significance. In addition, treatment group students had significantly fewer referrals than their control group peers.

The researchers set out to evaluate the effect of a brief school based mentoring program for first and second year middle school students, and found some statistically significant impacts on grades, behavior, and psychological well-being. This is in contrast with what other studies have found, and “tentatively, these results suggest that brief instrumental SBM [school based mentoring] that uses principles and practices from other evidence-based interventions may be capable of producing positive effects in the short term.” In mentoring literature, it is suggested that duration and closeness are the mechanism for which successful mentoring relationships arise, but given the constraints of school based mentoring programs, “SBM may need to initially rely less on relationship duration mechanisms and more on amicable working alliances that promote direct effects through instrumental components.”