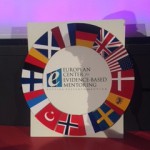 Last Thursday 3/17, the first European Mentoring Summit was held in the Netherlands. Officials from the European Union as well as researchers and mentoring practitioners from over 15 countries across Europe and the UK attended and shared ideas. It was truly amazing to learn about all the variations of innovative mentoring approaches that are being used, from the quality work of Mentoring Friesland Programma, which organized and hosted the summit, to the intensive mentoring programs in the orphanages of Russia and school-wide programs for refugees and immigrants in Rotterdam. The list goes on. At the Summit, we officially launched the new European Centre for Evidence-Based Mentoring. To a drum roll, EU representatives walked to the stage and placed their flag around the official new logo of the Centre. Very exciting!

Prior to the Summit (and the heartbreaking terrorist attacks), I joined representatives from the Netherlands in Brussels where we met with EU officials and lobbyists. They suggested that we create a Declaration, signed by all the researchers, expressing our commitment to the Centre and intention to collaborate. After a 3.5 hour researcher meeting, we formulated the goals of the Centre, signed the declaration, and established ideas for international collaboration. It was simply amazing  to learn about the high calibre of research involved (e.g., http://www.fsw.vu.nl/en/departments/sociology/staff/crul/index.aspx who will join our already vibrant research community in the US,  Mexico, Israel, Canada, and beyond. Dr. Janis Kupersmidt, the other US researcher at the summit, joined the American delegation and led a very popular workshop on the new Elements of Effective Practice. I do hope that, as this effort takes shape, other US researchers and practitioners will be tempted to attend the next summit, due to be held in Berlin in 2018. In the meantime, we will have ambassadors visiting the US Center and am happy to find ways to bring in additional American researchers and practitioners in innovative way.

A reporter from Science Guide, a Dutch periodical, perfectly captured the message of quality and duration that resounded across the meeting.

What makes a good mentor?
by Tim Cardol
23 maart 2016 – “Mentors matter most in transitions. From high school to college, from college to a job.” Jean Rhodes (University of Massachussets Boston) studies mentoring programmes all over the world. In Leeuwarden she shared her experiences. “Mentoring is not for everyone.”

Rhodes is visiting Stenden UAS at Leeuwarden in the Netherlands for the launch of the ‘European Center for Evidence-based Mentoring’ that will study the effects of mentoring programmes in Europe. In Boston Rhodes is the director of its American match. “In the United States there was this tendency to say that everyone can be a mentor. We would lower the demands in order to scale up our programmes as fast as possible.”

Extensive research Rhodes and her students did over the last years, however show this is not the case. “Mentoring sometimes work. That’s why I like the European focus on quality and fidelity. If the conditions are not right, mentoring has a stubbornly small effect.”

According to Rhodes we have to acknowledge that being a mentor ánd a mentee is not for everyone. “To be a mentee, you have to have at least some level of competence to form a connection, while as a mentor it is important you don’t go in to a working relationship with some biases. You also have to be sensitive to socioeconomic or cultural influences.” To let a mentoring programme succeed some kind of structure is furthermore needed, Rhodes showed in Leeuwarden. “Programmes have to be flexible yet structured and focused on the young person’s interest.” Also, a mentee needs to be sure he can count on his mentor’s consistency.

Speaking with ScienceGuide, Jean Rhodes – who will probably become a visiting professor at the new European research center – praised the effort made there at Stenden to bring European professionals in mentoring together to come to a better understanding of the subject. “For the United States this is also very important. We can bridge the gap, as we are now publishing in different journals, it is basically a different currency. We can bring that together now.”

To achieve sustainability in mentoring programmes “quality has to be put before growth and rigorous evaluation is a necessity. The United States and Europe should work together to achieve that. “What matters most is a shared interest and a close connection.”

Rhodes is welcoming two students from Friesland in September which will help her in her research and there’s more to come in the future. The professor hopes that students from Boston will go the other direction as well, in order to firmly establish the connection. “Having that kind of exchange would be invaluable.” 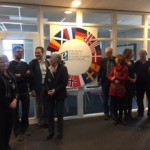 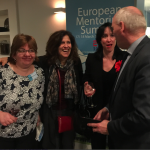 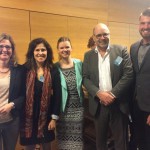 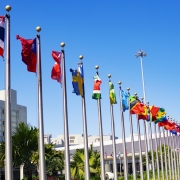