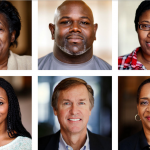 “His mother, Akima Lauderdale, an alcoholic with a penchant for selling cocaine, has been in and out of prison in Georgia. His father, Lorenzo Mauldin III, served nearly 12 years in a California prison. He and his four siblings shuffled between relatives and foster homes. So many foster families. A dozen, maybe more. Faces, he recalls. Names, he does not. Every day, he regulated and managed crises. Scrounging for food. Absorbing taunts for wearing the same clothes. Being yanked out of class by the police because Lauderdale had been arrested again, then thrust back into the care of the state. In college, he was rushed to the hospital after hurting his neck at practice, and again after a car hit him while he was riding his moped. “I’m telling you,” said Maurice Hart, his position coach at Maynard H. Jackson High School in Atlanta. “That’s the toughest man I’ve ever met in my life.””

Indeed,  defying the odds, especially for youth in foster care, Mauldin managed to complete high school and earn a bachelor’s degree from the University of Louisville where his speed as a pass rusher let to being drafted by the New York Jets.Maudlin had rare athletic talent, but it might not have been discovered and devleoped were it not for a foster mother, Monique Gooden, who took the time to throw him passes and enroll him in programs and leagues. There was also the”the choir teacher he called Mama, the house parents he called Grandma and Auntie and Uncle, the football coach he called Pops. With their help, Mauldin defied expectations.”

In a recent report by America’s Promise Alliance, is “Don’t Quit on Me,” authors at the Center for Promise note that young people need a range of relationships. As they note, they need:

Maudlin had different anchors at different time, depending on his developmental, educational, and professional needs and goals. And it’s unlikely that any one of them could have single handedly shepherded him from middle school through the pros. Instead, each of whom played critical roles and critical points in his development that created a safety net around him. As America’s Promise Jonathan Zaff noted,  “It’s not fair to mentors or to parents to put it all on their shoulders. When you put it all on one person, you break that person’s back, and the student won’t succeed.”

In his introduction to the report, APA President and CEO notes that caring relationships “are powerful vehicles for growth, particularly for young people living in challenging circumstances. And yet, too many young people don’t have enough relationships with stable, caring adults who can help them get what they need to stay on track toward graduation and career. Relationship poverty is not a lack of love or family, but a lack of access to additional sources of support that can lead to a more promising future.”