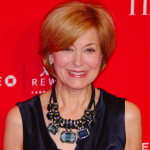 Jane Pauley is an inspiration to the encore movement – and a leading light. A longtime Purpose Prize judge, she has been the abiding presence at our annual Purpose Prize event over the past three years. Now, in her compelling book, “Your Life Calling: Reimagining the Rest of Your Life”, Jane provides a vision for purpose and contribution in the second half of life we can all aspire to.  Her book – which has already become a New York Times bestseller— makes the case hat our generation can change the world for the better, and illustrates that prospect through a series of beautifully told stories, including those of Encore.org Purpose Prize winners Jenny Bowen and Barbara Chandler Allen.

I’m delighted to share this interview with Jane by my colleague Marci Alboher, author of another great book, The Encore Career Handbook, and former New York Times “Shifting Careers” columnist.  I think you’ll find it illuminating and uplifting.  And I hope you’ll go on to read Your Life Calling, if you haven’t done so already.

An Interview with Jane Pauley

A highlight of my work at Encore.org is that it’s allowed me to meet and work alongside Jane Pauley, one of my lifelong heroes.  As a powerful voice on the subject of the encore life stage, Jane (Yes, I now actually call my hero by her first name!) has become a true friend and colleague.

But for me, she was something long before that. A role model for how you ‘live out loud’ as a journalist. She did it on the local news each morning in the most natural way. And she inspired outside the anchor seat as well – in her life and in her work. She managed her career on a public stage and used her platform to become an advocate for mental health, and now – in her encore years – reimagined herself by shedding the spotlight on others who are using the gift of longevity to have an impact.

I’m grateful that Jane took some time from her national tour to answer some questions I had about how we can all seize the opportunity of the super-sized life course available to us. ­

People with decades of experience have the collective power to change the world for the better. What are the greatest obstacles to this vision and how should we try to tackle them?

I’ve told a few ‘epic’ stories.  Not one of these individuals began by asking the question, “how can I reinvent myself?’  The idea for Half the Sky Foundation came to Jenny Bowen as she was working at her kitchen sink looking out a window. Ken Wood was looking forward to retirement when a car pulled up with a church delegation that wanted to buy the drilling rig he’d advertised for sale to drill wells in Africa – asking, by the way, would he go with them to show how to use it?. Barbara Chandler Allen and her son had good idea for decorating a huge Education Center in Philadelphia – digitally enlarging children’s art; but they’d been hanging their installations for some time before the big idea occurred to them. Inspiration, epiphany, serendipity can’t be called up at will. Rather than wait for an epiphany, find a cause you care about, find out who’s already doing the best work in that area, then think about what you have to contribute.

This new extended period of midlife can feel at once like a gift of time and a wide expanse of time to be filled. What would you say to people who feel daunted by the stories of later life renewal you tell in Your Life Calling?

Betsy McCarthy talked about “being comfortable in ambiguity and not panicking in uncertainty.”  She also spoke of doing a lot of ‘floundering around.’  I could relate to that.  For four years I didn’t have a good answer to the question, ‘what are you up to these days, Jane.”

But still I feel daunted by stories I tell, too! I can’t picture myself going back to college,  or starting a business, or a non-profit, drilling wells in Africa ­– but why should I?  What these stories have in common is that each person was working with their unique skills and experience, but by courage, necessity, or serendipity, deployed them in some new way.   Barbara Allen talked about seeing the ‘threads of everything I’ve done before, woven in a new tapestry.”  Kirk Rademaker described the same idea as a ‘confluence’ of his talents, skills and experience.

You’ve been a champion of the encore movement for some time now. What advice would you give to someone wondering how to have a positive impact in the world?

Maybe advocating for change is your calling.

Look at what Michael J Fox has done.  His name is not synonymous with ‘Parkinsons’ but with ‘Parkinsons- research’.  Sure he must be frustrated that ‘the cure’ he is working so hard to find has been too slow in coming, but he projects a positive attitude and example and his confidence that a cure is coming inspires everyone and keeps the dollars flowing into the research.

I’ve tried to follow his example in my advocacy for mental health – instead of talking about stigma, to fight it with a positive message and change negative stereotypes associated with mental health disorders by changing the narrative to one of hope.  It works. We can all learn from the example of Betty Ford who inspired the fight against breast cancer when people were still too afraid to even talk about it! We wear pink ribbons and race for cure. Hope saves lives. It changes attitudes.

I want to hit a topic everyone asks about – age discrimination.  How do you reconcile the reality of age discrimination with the stories of renewal in the book, and that you continue to find for your Today show segments?

I’m pretty reality-based and I know age-discrimination is real and is not going to end in my lifetime, though by being part of this ‘movement’, by sharing stories that subtly but powerfully change perceptions about age, I’m fighting age-discrimination.

I reconcile my stories sometimes by measuring with another metric than a job or paycheck. Consider Ken Wood — he’s made his living drilling wells. It’s ironic but probably true that at his age, despite his experience and expertise, he probably wouldn’t be the guy to get hired if he needed to find a job in the drilling business today. But there he is in Africa – doing it for free – and saving thousands of lives.

By the time your children hit middle age (however we’ll define that!), do you think we’ll still be captivated by stories of later life achievement and productivity or do you think we’ll have come to expect people to remain vital and contributive throughout their 50s, 60s, and beyond?

I feel so fortunate to be part of a paradigm-shifting moment.  We are changing the world.  And besides, my children already take for granted that their 60-something parents are vital, productive and valuable contributors.  When I was their age and my parents were mine, it was a very different world.