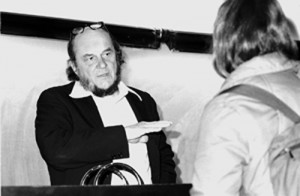 In the fall of 1979, I had the blind luck of enrolling in a freshman psychology course that was taught by George Albee. It did not strike me as the least bit unusual that a former President of the American Psychological Association staffed this lowly offering. Nor did I have the context to appreciate that his take on modern psychology was a radical departure from what was being taught in introductory courses across the country. Instead my first exposure to psychopathology was through the lens of social inequality, which illuminated the pernicious effects on mental health of racism, sexism, homophobia, and poverty. Lectures on the DSM centered on its unreliability, and on its intractable links with the economic interests of insurance companies. And the course mantra—“that no disorder has ever been treated out of existence”—rang from that lecture hall with a force that propelled George’s students toward careers in public health, social policy, and community psychology.

My luck followed me back to my freshman dorm, where I stumbled into a deep friendship with George’s daughter Marina, a woman whose worldview and sardonic wit were unlike anything I’d encountered in suburban New Jersey. I soon found, however, that Marina and I shared many commonalities and similar backgrounds—i.e., we both had a sister and two older brothers and larger than life fathers who were WWII vets. And so it was, I found myself magnetically drawn to Marina, George, and the entire cast of Albee characters, whose small farm overflowed with animals, exotic foods, and books, many books. By the time we were ready to graduate, Marina and I had moved onto to the farm where, in exchange for room and board, I tended a flock of chickens (including a rooster named Pecker).

My connection with George during those years was both intellectual and emotional. His eloquent writing and forceful ideas inspired a passion in his students like no other professor on campus. I was drawn to him less for comfort than for his unrelenting commitment to social justice, his sense of humor, and his gently ironic approach to all things prosaic. But what really grabbed me, and has never let go, was his belief in me. George seemed to hold the impression of me that, at my best, I hoped to convey. Over time, my sense of self shifted from a Jersey girl with modest ambition to someone who could and should try to make a difference in the world through community psychology.

Of course, I did not set out with mentoring relationships as my academic field of specialty. But once discovered, the stage was set. As a community psychologist, I was taken in by the elegant logic of deploying volunteers to “give psychology away.” And, as a clinical psychologist, my transference was a vein that could be mined to the depths of the earth. In fact, my career is proof of Freud’s assertion that “a certain degree of neurosis is of inestimable value as a drive, especially to a psychologist.”

George occasionally mailed out cramped envelopes of his writings—a grab bag of scholarly articles, choice travelogues, recipes, and humor columns. Though impossible to limn a complex life from a single care package, it’s worth a try. Last spring, he sent a collection of “odds and ends to show you that I keep busy” which contains an article in which he advises the mostly white, wealthy retirees of Longboat Key, Florida to visit London’s Chinatown where “they will chop up half duck for you to take away for a midnight snack.” Jammed beside a couple of humor columns is an article on social justice that contains a personalized note enjoining me to “Keep up the struggle!” With the Marxist observation that “The ruling ideas of a society are those that support the ruling class” riffing in the background, George takes on everything from Protestants and Conservatives, to patriarchs and Tipper Gore. He writes that, “I would love to see a coalition between psychology and the oppressed and exploited that would speak with one voice against the ruling elite who reject the idea of social equality.”

Many members of this fragile coalition faithfully read The Journal of Primary Prevention. Although cognitive neuroscientists rule the ideas of contemporary psychology, George reminds us that there is a more contextualized analysis of mental illness—and that a just world is its own reward. George, we weren’t ready for you to leave. Many of us still have work to show you, stories to tell, and corny jokes to share. But your passions live on through your children and grandchildren, your students and grand-students. And, you will always be in our hearts, tapping our inner outrage, and reminding us to “Keep up the struggle!”

A conversation with Professor Bernadette Sanchez

Learning from the Field of Work-Based Mentoring