With less than a week to go before the general election, mentors and other caring adults are finding new opportunities to discuss the important  issues that shape our society affect our nation’s youth. To inform such conversations, the MyVoice Team at the University of Michigan recently released the results of a national survey of American youth. The survey was designed to better understand the issues that are most compelling to youth, who or what influences them on these issues, and their attitudes about voting. Approximately 1000 youth aged 14-24 were surveyed about their thoughts on voting in February 2020 (prior to the COVID-19 pandemic) and again in September 2020.The full report is available online, and is excerpted below.

“Top election-related issues among youth include social justice, healthcare, the economy, and climate change Of the many issues noted as important, the most common issue mentioned by youth at both timepoints was social justice. Within this category, youth referenced many social justice topics such as criminal justice reform, police brutality, LGBTQ+ rights, civil rights, and reproductive justice, among others. One individual says “I care mainly about equality across the table. Whether it be by race, gender, age or lgbt community.” Notably, there was an increase in responses mentioning social justice issues from February to September 2020, which may reflect the national landscape after the May 2020 killing of George Floyd in Minneapolis while in police custody. Other topics like healthcare, the economy, and climate change were the next most prominent issues referenced by youth. In September, the COVID-19 pandemic was often cited in the context of a variety of issues such as healthcare, economic recovery, social justice, and education. One participant noted that they care about “how the government is handling COVID, healthcare and public health issues.” 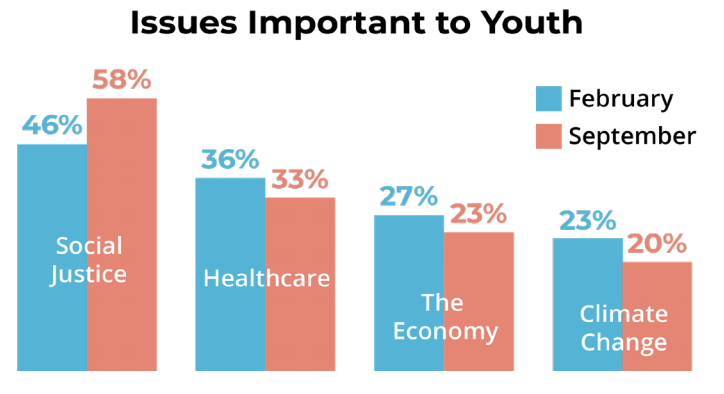 The vast majority of youth indicated that their voting stance was affected by multiple aspects of their life, rather than a singular factor. In both February and September, the most cited influence on youth opinion was friends and family. This was closely followed by responses referencing personal beliefs or life experiences. For instance, some participants included a personal story such as witnessing a family member navigate the healthcare system. One individual shared that “things like money and healthcare are huge stressors in my life.” Additional factors that influence youth include the media (“google and youtube” or “social media in general”), celebrity or social media influencers, self-identity (“being a 21 year old college female”), specific issues (“I want my future children to live on a green planet”), and hearing about other people’s experiences (“I try to listen to those most affected”).

Most youth believe their vote matters

In both February and September, the majority of youth responded affirmatively when asked if they believe their vote matters. One person explains “Yes, every vote matters. It’s important that I use my right to have a voice in the direction of my country and communities.” Conversely, for youth who do not believe that their vote matters, the most common reason was a mistrust in the system. 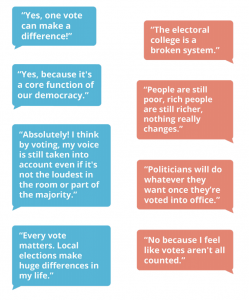 Some individuals alluded to a broken political system, illegitimacy of the electoral college, election fraud, and corrupt politicians. More broadly, some youth referenced feeling marginalized or non-represented, as well as pessimistic that things never change. A participant notes “It’s just that when I vote things don’t seem to change in my community.” In September, a trend emerged in which some youth would explicitly state that their vote does not matter, yet still express their intent to vote. One person writes “I don’t think my vote matters, but I will diehard urge myself and others to go to the polls and vote.” This suggests that voting behavior may be due to more than a belief in the power of one’s own vote.

The majority of participants noted one or more recent events that impacted their opinion on voting. Some common responses referenced the COVID-19 pandemic, social justice movements such as Black Lives Matter, instances of police brutality, events related to specific candidates or government leadership, questions of voter suppression and election legitimacy, and personal events such as college experiences or conversations with friends. While our previous data revealed that healthcare is an important issue for youth, this was reinforced in the context of the COVID-19 pandemic. One person writes “what has impacted me this year is seeing how so many people die from the pandemic and that health services are not provided due to not having insurance.” Through the lens of the COVID-19 pandemic, many youth are disillusioned with voting and other government domains. For instance, one person writes “the pandemic as a whole has changed my political opinion a bunch, just because we politicized it so much rather than coming together during a global period of distress.”

Besides voting, youth also make their voices heard through protesting and activism online

Youth reported multiple ways to have their voice heard outside of voting including social media, discussion with friends and family, contacting representatives, campaigning, petitions, activism, and financial donations, among others. 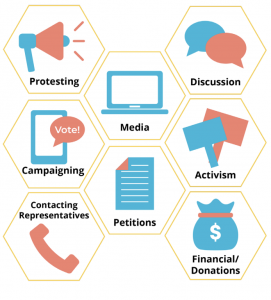 However, the most popular response to how youth can make their voices heard in both February and September 2020 was through protesting. One respondent writes, “I attend a lot of activist marches and protests but only those which are peaceful and positive, never counter-protesting or speaking hate.” Another individual says, “If I just had a little protest it [could] be on the news, in the newspaper, maybe even on my school news…will people listen, maybe not, but they’ll definitely hear something.”

The challenges of 2020 have significantly impacted youth’s opinions and perspectives on voting. In September, the impact of COVID-19 emerged as a prominent concern for young voters as issues of healthcare became increasingly important. A general mistrust of the current government system, including voting, was evident across a broad range of youth, which may impact future perspectives and behaviors among young Americans.”

“If I look at the mass, I will never act. If I look at one I will”: Why statistics are no match for a good story

Back to the future in youth mentoring: Predictions for 2020