Forty-eight years ago this summer, I started my freshman year at Drury College (now, Drury University).  My high school academic performance was less than impressive, to say the least. Studying was not my highest priority. Few courses in high school inspired me to work hard.  It wasn’t until my senior year, when I was able to take an elective course in psychology, that I became truly passionate about a subject.  By the time I arrived on campus at Drury in August of 1971, I had made up my mind to become a psychologist.

Although I didn’t recognize it at the time, from the very beginning I benefited from mentoring at Drury.  Dr. Marvin Layman, a professor of sociology, led the freshman orientation group to which I was assigned.  One day, between sessions, he asked me to take a walk with him around campus.  After strolling a bit, we sat on a bench and he started a conversation about what it takes to be a successful college student (he must have seen my dismal high school grades and targeted me for this special intervention!).  I am now quite capable of forgetting where I parked my car, but I will never forget his advice — simply to stay ahead of assignments in each class because falling behind creates a hole that may be impossible to climb out of.  Such a simple idea, but I took his advice to heart and went from being a B- student in high school to graduating magna cum laude from Drury. 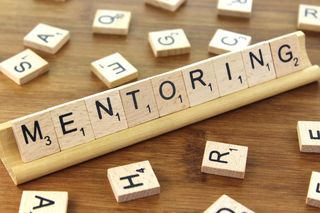 In the fall of my first year of Drury, I enrolled in the introductory psychology course.  I vowed to finish first in the class.  The course was taught by a young and vibrant psychologist, Dr. Victor M. Agruso, Jr.  Dr. Agruso was an experimental psychologist with a strong Skinnerian orientation. He taught at a very abstract level and his approach to testing was to use 100 item multiple choice exams, comprised of many analogies and other conceptual questions.  Often, the mean grade on these tests was in the low 70s, and scores in the 90s were rare. I achieved my goal of attaining the highest marks in the course, but more importantly I was inspired to become a learning theorist.  Indeed, some years later, I ended up getting my doctorate in experimental psychology with a focus in animal learning and memory.

Drury had a small psychology department in those days.  So it was natural that I chose Dr. Agruso to be my academic advisor. I subsequently had him in several classes and developed a very close mentoring relationship with him.  In 1975 I graduated and left Missouri to begin graduate school, but what I didn’t know was that this mentoring relationship with Dr. Agruso would last for four more decades. During trips home from graduate school, I would without fail visit Dr. Agruso and often he and his wife Ramona would take me to dinner. Some years later I was an Air Force psychologist teaching at the U.S. Air Force Academy (and, happily, teaching their psychology of learning course, replete with rat lab), when Dr. Agruso recruited me to join Drury’s faculty as an assistant professor of psychology.  It felt strange at first to be colleagues with my mentor, but for my 12 years on the Drury faculty he continued to watch over my development as a psychologist and teacher. Dr. Agruso had finally become Victor to me, a close friend as well as a mentor.

For a variety of reasons, and with Victor’s full support, I left Drury in 1998 and soon ended up in my current position of Professor of Engineering Psychology at West Point, where, still happily, I continue to teach cognitive psychology (no rats, but still a focus on learning).  Victor and I remained in touch.  He had retired to Florida and loved living in his golfing community.  But in early 2017, he told me that he had cancer, and that it was serious. By July, his condition was grave.  Ramona called me and invited me to say a few words to Victor on the telephone. He was unable to speak, but he clearly heard and understood me.  A few hours later he passed away.

Ramona asked me speak at the funeral. This is where the impact of his 40-plus years of mentoring hit me.  Speaking on behalf of the hundreds of other psychology students he had mentored in his 35 years at Drury, I spoke to the family about the positive values he imparted to each of us who had the pleasure of knowing him. His loyalty, sense of duty, respect, selfless service, honor and integrity, and personal courage served as a model to all who knew him. His legacy continues to shape the way I think and respond (I haven’t forgotten my Skinnerian roots) to this day.

The value of a mentoring relationship is not confined to psychologists or professors, and I do not claim to be a mentorship scholar.  You can easily learn more about the science of mentoring with a little effort.  But at its core, mentoring draws on the character strengths of humanity.  Capacity to love, gratitude, forgiveness, perspective, integrity, leadership, and hope are some of the character strengths that make for a good mentoring relationship.  Mentoring hinges on a long-term and genuine relationship between people. Sustained over time and done right, mentoring creates a mutually beneficial relationship that creates strong, lifelong bonds. Victor Agruso was truly like family to me.  If a former student or two feels the same way toward me, then it was all worth it.