The frenzy of activity surrounding recent Senate passage of a bill on tax reform by a two vote margin of 51-49, crafted by Republicans, which took place at 1:50 a.m. on Saturday, December 2, sets the stage for reconciliation discussions with House members around their recently passed version of tax reform.  To say the legislators of the parties are not “playing well together” in the House and Senate would be an understatement of consequence.  The next few weeks of discussion are critical in trying to reframe some of the most damaging elements of these bills so they don’t become law.   We need to be mindful of what this process will look like, and, how we can and must lend our reasoned voices to the thinking of our senators and congressional representatives on shaping a final tax reform package.  Getting emails out as well as placing calls in the coming days is not a luxury but a necessity on behalf of our young people and their families.

Because the House and Senate passed different versions of tax reform legislation, we have a chance to stop it before a final vote.  The Joint Committee on Taxation estimated that the Senate bill would increase the national deficit by $1 trillion over 10 years.  This is a stunning amount and the burden of this will result in increased taxes for middle and low-income earners, lost health care, education, and other services.  While these increases will be phased in over time and kick in most acutely by 2027, the additional deficit will impact availability of affordable housing, Meals on Wheels, funds to reduce the burden of college debt, monies to combat opioid addiction, and improvements to K-12 education.  Low-income families with children will lose the most in this proposed scenario.

President Trump and some in Congress, including Senator Marco Rubio (R-FL), have suggested that once the tax reform is enacted they will move to cut vital programs like Medicaid, SNAP/food stamps, and aid for people with disabilities.  Meanwhile, lawmakers have already let funding lapse for the Children’s Health Insurance Program (CHIP), a bi-partisan safety-net program that covers almost 9 million low-income children and pregnant women.  It has been two months since the last authorization ran out and now individual states are running out of money to protect this key safety net effort.  Utah, for example, posted an online notice last week saying that funding will run out by the end of January and Arizona, California, Ohio, Minnesota and the District of Columbia report “nearing the end of their funding.”

Congress must reauthorize funding for CHIP to protect it because it is administered as a block grant which gives states a set amount of federal dollars instead of an ongoing funding stream such as Medicaid.  Joan Alker, executive director of Georgetown University’s Center for Children and Families was recently quoted in the Washington Post stating “This is not a good advertisement for the people, e.g. current administration officials, who want to bring you block grants in Medicaid.”

Another looming issue on the federal landscape is that Congress has yet to agree on a new funding package to keep the government running after December 8.  Unless bi-partisan agreements are reached in the next few days, the possibility of a shutdown is on the horizon.  Republicans are seeking a short-term, two-week resolution to keep the government operating, however, there is push back on this approach from Democrats who are seeking acceptable increases in nondefense spending in a new funding package.  Funding for mentoring, career and technical education programs, and workforce development, are not viewed as priorities by this administration.

There are many encouraging examples of the role(s) mentors have played in the lives of their mentees and often there are especially heartwarming narratives about how mentors have helped mentees prepare for school exams, presentations, and/or filling out college applications.  As lively debate ensues throughout the country about over-testing of students, another area of support for low-income students gaining traction is helping them find a path for taking the SAT or ACT test for no cost.

The ACT and the SAT, the college entrance exams required for admission to most selective colleges in the United States, require resources from parents/caregivers often not available in low-income homes.  Students typically have to register and pay for these tests and travel to an exam facility on a weekend to take the exam.  This translates into internet access, a computer, a credit card and, some form of transportation.

At this time, Connecticut, Illinois and more than 20 other states, ACT and/or SAT administer the exam(s) without charge, during school hours.  As of 2017, 25 states require that students take the ACT or SAT.  In New York City, the test is given free during school hours but isn’t required.

Michigan began requiring public school juniors to take the ACT in 2007, and the share of high school graduates taking a college entrance exam rose immediately to nearly 99 percent from 54 percent.  Joshua Hyman, an assistant professor of public policy at the University of Connecticut, studied effects of this initiative.  Not just low-achieving students had been skipping the ACT (or SAT).  Universal exams cannot necessarily close gaps between poor and rich students in college attendance.  However, in Michigan it has produced small increases, especially at four-year colleges and particularly among disadvantaged students.  Hyman also found that this finding was borne out similarly in Maine, Illinois, and Colorado.

Evidence shows that if talented low-income students are mentored and coached, they are more likely to go to college, especially to a selective one.  But we have to find them first!  Universal free testing might be a solution to placing bright disadvantaged students on the radar of schools, mentors, and advocates that can help them.

Making COLLEGE WORK – Pathways to Success for Disadvantaged Students provides a useful and insightful review and analysis of the causes of poor college outcomes for low-income and minority youth and of the policies designed to improve those outcomes.  Written by Harry J. Holzer and Sandy Baum, this new book contributes innovative approaches and techniques suited to advocates, mentors, and teachers who can be change-makers with regard to improving college graduation rates for low-income students.  The authors provide a comprehensive review of programs that work and, importantly, speak to needed policies that have potential for reshaping the postsecondary landscape of low-income young people.  Harry J. Holzer is the John LaFarge Professor of Public Policy at Georgetown University and a fellow at the American Institutes for Research, and a nonresident senior fellow in Economic Studies at Brookings.  Ms. Baum is a higher education economist and a senior fellow in the Education Policy Program at the Urban Institute.  The book was published in 2017 by the Brookings Institution Press and is available through www.brookings.edu/press.

It is a privilege to contribute this column to the Chronicle each month.  The author is sending best wishes to all of our readers and especially to Jean Rhodes and Justin Preston for a very Happy, Peaceful, and Reflective Holiday Season and Happy 2018! 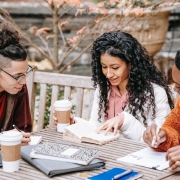