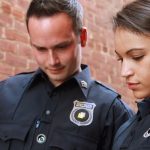 In early 2017, Big Brothers Big Sisters of America took on a program nationwide that pairs youth with police mentors.

Another mentoring program in Atlanta pairs teens with officers on horseback, the Atlanta Mounted Patrol, and the youth get to know the officers as well as groom horses when police are off-duty.

Other police mentoring programs are growing as communities seek to defuse tension between law enforcement and young black men.

While these efforts are receiving much praise, they’re also raising questions.

In fact, MENTOR: The National Mentoring Partnership, an advocacy and mentoring resource organization, is devoting a whole plenary session to the topic at its annual conference, held in February this year.

But some critics question the use of mentoring to address a problem they say is systemic.

“It’s one thing to build a rapport with people you’re supposed to serve. It’s another thing to treat them justly,” said Andre Perry, education consultant and writer and former dean of the College of Urban Education at Davenport University in Grand Rapids, Michigan.

Mentoring is a limited effort if it just gets young people to know police but police continue to treat black youth unfairly, he said.

“The goal should always be to push for policy change,” Perry said.

“Too often youth are ‘policed’ and are not seen as members of the community,” he said. They’re seen as a threat and are monitored in order to protect other people, he said. “But they’re the ones who need protection.”

Perry said that for mentoring to be effective, police need to finally listen to youth and use that information to change the way young people are treated by police.

“There’s nothing wrong with youth, but there’s a whole lot wrong with policies around policing,” Perry said.

He said police need to understand the root causes of anger — the disparities that exist that he said are caused by historical biases leveled against black youth.

These young people have the right to be angry, Perry said.

Da’Shaun Harrison, student at Morehouse College in Atlanta, is president of the college NAACP chapter and an activist with ATL is Ready, which seeks to amplify the voices of black and marginalized people, according to the organization.

“I have an issue with the system of police in general,” Harrison said.

MENTOR has responded to concerns raised about the mentoring of young men of color.

The organization worked with the Campaign for Black Male Achievement to design a curriculum for adults who mentor young black men, said Liz Hardy, a MENTOR spokesperson.

The Campaign for Black Male Achievement is a national membership nonprofit that fosters leadership to improve outcomes for black men and boys.

MENTOR also worked with My Brother’s Keeper Alliance, a group of organizations that grew from the White House initiative to improve opportunity for African-American young men. Together the two organization created “The Guide to Mentoring Boys  and Young Men of Color.”

It calls on the mentors and programs to look at their own biases and understanding of issues, Hardy said.

The guide is based on the premise that young men of color are at a disadvantage because of systemic racism and inequality. It notes that zero-tolerance policies in schools and “unbending police practices” impact young men of color for than white kids.

It recommends that mentoring programs use a strengths-based approach that focuses on the strengths of young men and their communities, and it calls for developing a “critical consciousness” that acknowledges social, political and economic inequalities. Programs and mentors should furthermore be able to challenge those inequalities and “oppressive elements of society,” the guide says.

This allows adults and the youth they mentor to think and talk about inequities and challenge them, allowing change to happen, according to the guide.

“Programs should consider this approach when serving a significant population of adolescents and young men of color,“ the guide advises.

But can police mentors change a system they are part of?

Shapiro, of MENTOR, said that when matching mentors and mentees, programs have to take into consideration biases, perspective and systemic pressures.

“Certainly, depending on the age of young people, their experiences, structure of the program, and setting, these dynamics could be strong when the mentor is a member of law enforcement,” he wrote in an email.

He confirmed that MENTOR has seen programs work well to build positive relationships and increase understanding.

Judging from public statements, however, some mentoring programs seemed based on the idea that the goal is to change young people’s perspective about police.

Youth can learn that police “are just people. Don’t look at them negatively,” said Nikki Foreman, director of communications for the Atlanta Police Foundation, which sponsors the At Promise mentoring program.

However, MENTOR has developed two virtual trainings to accompany the guide to help mentors learn and change.

The first training video helps mentors think about their own possible biases.

They are encouraged to look at possible assumptions they may be making, such as that it is good to be “color blind (“When I look at you, I don’t see color”) or that individuals can rise above racial systems without questioning them (“I’m not racist. I have several Black friends”). It addresses implicit bias, the unconscious assessments that people make, and encourages mentors to be clear about their biases and how they play out. Implicit bias could lead a mentor to fail to acknowledge a mentee’s individuality, for example. It could cause poor communication and leave the mentee feeling isolated, according to the training material.

Mentors are encouraged to take an implicit bias test and use the results to get to known their mentee better and not see him as a proxy for a group.

The second training video encourages mentors to see the social capital — the network of community relationships — that surrounds a young person. Mentors should connect kids to the elders in the kid’s community and value what the community offers, according to the video.

Mentors can ask questions, learn about the young person’s life and surroundings, and be open to opportunities that may not initially be visible, according to the video.

The goal is to help young people see and access their social capital and become empowered, according to the video.

This is a repost from youthtoday.org, for original article, please click here.