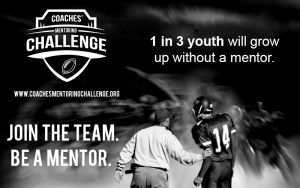 The Big Ten Conference is joining MENTOR to launch this year’s Coaches’ Mentoring Challenge, an effort to connect young people with caring adult mentors.
The Coaches’ Mentoring Challenge is an annual campaign to connect more youths to mentors that began with coach Tom Osborne at the University of Nebraska and coach Bill Snyder at Kansas State University in 2008. Osborne had already been promoting adults mentoring young people for 17 years by the time he teamed with Snyder to encourage even more people to become mentors.
Osborne and his wife, Nancy, founded the TeamMates Mentoring Program in 1991 to provide support and encouragement to school-age youths. With a mission to positively impact the world by inspiring youths to reach their full potential, TeamMates is serving more than 7,500 young people in 130 communities across Nebraska, Iowa, and California.
To become a mentor through the TeamMates program, people can go to www.teammates.org or call 1 (877) 531-8326.
MENTOR, also known as the National Mentoring Partnership, is the unifying champion for expanding quality youth mentoring relationships in the United States.

“By connecting young people with caring adults we provide them with a powerful asset to achieve success in all aspects of their lives,” said David Shapiro, CEO and president of MENTOR. “Coaches are mentors both on and off the field and they are uniquely positioned to motivate fans to become mentors. We’re grateful for the commitment of those involved and the energy brought by the Big Ten support of this challenge.”

“This partnership is an exciting opportunity to make an impact on the young people in our communities,” said Big Ten Commissioner James E. Delany. “Our vast network of passionate alumni and fans can create both positive connections and impressions while mentoring the next generation of young fans.”

MENTOR’s report, “The Mentoring Effect,” has found that mentoring is linked to improved academic, social and economic prospects. As just one example, at-risk young adults surveyed who had mentors while they were growing up were 55 percent more likely to be enrolled in college than those who did not have mentors. The report also found that one in three young people will grow up without having a mentor of any kind, either through a formal program or naturally through family friends or community ties.

The report was based on a nationally representative survey of young adults ages 18 to 21.

The Coaches’ Mentoring Challenge kicks off on Aug. 1 and runs through Nov. 30, with final results released during the first week in December. Fans interested in becoming a mentor can visit www.CoachesMentoringChallenge.org and search for a mentoring program in their community. 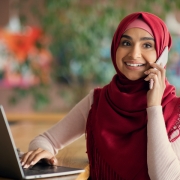 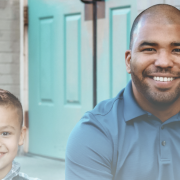