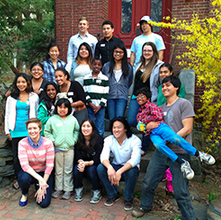 “This program has helped me feel less alone as an adopted person. I don’t feel like the only one on campus who is adopted.” That’s the kind of impact that the Adoption Mentoring Partnership (AMP) can have for the undergraduate students who serve as mentors for adopted kids in Amherst and the surrounding communities.

Now in its third year, AMP provides a unique support system for adopted children: it matches matches adopted children with a same-race, same-gender, undergraduate student, who is also adopted. By fostering a healthy and safe development of a friendship between the child and the undergraduate mentor, the program offers each child the opportunity to spend time with someone uniquely prepared to talk about issues related to race, ethnicity, and adoption.

This special relationship has significant benefits for the mentors as well. “I have learned that by just being a mentor I can impact and change a single child’s life or experience growing up,” commented another mentor. There are now 20 such matches.

A strong research component was built into AMP from the start. In January 2013, AMP presented its partnership model and research at the National Mentoring Summit Conference in Washington, D.C., where there was much discussion about replicating the program to serve adopted children in communities across the nation.

AMP is one of the many programs initiated and overseen by Harold Grotevant, Rudd Family Foundation Chair in Psychology. The Rudd Chair initiative seeks to develop synergy among scientists, practitioners, and policymakers from varied disciplines who share interests in the many topics relevant to adoption. The ultimate goal of these activities is to contribute to evidence-based practice in adoption and to provide research-based information that will influence policy at agency, state, federal, and international levels.