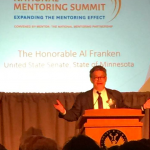 Senator Al Franken addressed a gathering at the Library of Congress last week and shared some good news and a funny story.

First the good news. Senator Franken (D, MN) assured the crowd that we will soon see the passage of The Child Protection Improvements Act (CPIA), which will enable all programs to access affordable FBI fingerprint checks. Congress has been considering taking action on CPIA but has encountered staunch opposition from Sen. Tom Coburn (R-Okla.), an outspoken fiscal conservative. Sen. Coburn’s retirement paves the way for the bill’s passage and the provision of long overdue protection that our nation’s deserve. Indeed, although the vast majority of volunteers are well intended, harmful adults sometimes slip through. Most programs have taken steps to conduct background checks but, for the most part, these efforts have been inconsistent. Only about half of U.S. States provide youth-serving organizations access to national FBI fingerprint, and two-thirds allow only a statewide background check. This makes it easy for a convicted perpetrator to pass undetected from one state to another. Indeed, in a screening program called SafteyNET, which was championed by MENTOR: The National Mentoring Partnership, over 6 percent of the 100,000 potential volunteer mentor who underwent FBI background checks had records of concern, including charges of rape, murder and extreme animal abuse. That’s 6,000 potentially inappropriate volunteers who could have been paired with children. In addition, 41 percent of those crimes were committed in a state different from the potential volunteer’s location, meaning a statewide background check would not have revealed the crimes. Unfortunately, this successful pilot program was cut Congress failed to pass the necessary legislation. According to Senator Franken, we now have another chance to protect the hundreds of young people who are paired with volunteer mentors each year.

Senator Franken then told the story of thinking he was supposed to call every newly elected member of Congress to congratulate them. So, although no other Senators thought to do so, he meticulously went down his list, including placing a congratulatory call to incumbent Senator Rand Paul (R-KY). They had a nice conversation and then, months later, Sen. Franken learned that Sen. Paul had requested that he serve as his mentor (apparently every freshman is required to nominate a more senior Congressional mentor). At their mentoring lunch, Sen. Franken imparted what he considered to be his most sage advice. “Look,” he said, “there are two kinds of members of Congress–work horses and show horses. To be a good work horse,” Sen. Franken advised, “read the background on every bill, show up for every meeting, and ask good, thoughtful questions at hearings.” A month later, Sen. Paul began skipping all meetings and hearings to attend campaign events and to explore a run for president. “Clearly,” Franken said in his typical deadpan, “I was a lousy mentor.” And it’s true. Instead of listening to his mentee, and understanding his goals, Sen. Franken had mistakenly assumed that they shared common goals. His advice for all mentors?—be a good listener, understand the goals of your mentee, don’t assume they are the same as yours, and support your mentees on their terms, not yours. And, importantly, learn from your mistakes. Good advice indeed.

Why do some mentoring relationships “click” while others fail?