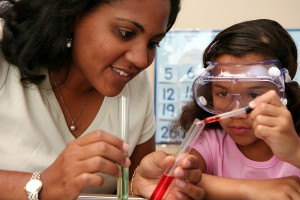 Sometimes a simple anecdote can illustrate a point far better than mounds of research.  It was written by Jerome Groopman, M.D., Professor of Medicine at Harvard Medical School, Chief of Experimental Medicine at Beth Israel Deaconess Medical Center, one of the world’s leading researchers in cancer and AIDS, and a public intellectual. In this excerpt, from a recent New York Review of Books, Groopman highlights the vital importance of teachers that “get” their students and understand their strengths.

I never learned to type. The best I can do is hunt and peck with two fingers while looking at the keyboard. Instead of touch-typing, I was taught how to work with metal: shape flashings, solder wires, drill into tin. Learning such skills traces back to the fifth grade at Public School 187 in Queens. My teacher, Mrs. L., divided the class into those able to undertake a so-called “academic curriculum” and ultimately attend college, and those like me, only fit for vocational training, destined to work in factories or repair shops.

Mrs. L. was a squat, middle-aged woman with a dour mien. She made clear to us what marked a promising student: neat penmanship, proper posture, and sharp attention to her lessons. It did not take her long to conclude that I lacked all of these indicators.

I spent much of the class day looking out the window at our concrete playground, dreaming about stickball games, watching in my mind’s eye a Spaulding rocket far beyond the outfield. When not occupied with home runs, I studied a girl with a pageboy cut and a fetching smile. I swiveled in my seat and scratched my chair on the linoleum floor in an attempt to get her to look at me. Instead, all I got were sharp reprimands from Mrs. L. Moreover, my handwriting was poor. It didn’t seem worth the effort to perfect a capital J or G, with all of the curlicues of Parkman script. When the bell rang at 3:00 PM, I vaulted through the door, racing to the playground where sides were quickly chosen for the stickball game.

The first parent–teacher conference was held at the end of September, and Mrs. L. rendered her judgment. “He is not college material,” she said flatly to my mother and father. A brief listing of all of my deficiencies followed, including shifting in my seat, looking out the window, making noise with my chair, and sloppy penmanship. I lacked intelligence, motivation, and focus. Such pupils were best served by learning a trade. So it would be metal shop instead of typing class.

My parents listened quietly to Mrs. L.’s assessment. After they left, my father turned to my mother and offered a different conclusion: “He has shpilkes.” My mother nodded knowingly. Shpilkes is a Yiddish word that denotes “ants in your pants.” The restless traits I displayed in the classroom were familiar from my behavior at home. As far as my parents were concerned, shpilkes was nothing out of the ordinary for a boy in fifth grade, except that perhaps I had more of it than others.

The first day of the sixth grade proved very different. Mrs. Beverly Bernstein was my teacher, a tall, stately woman with raven hair pulled into a tight bun. Instead of opening class with a practice session of Parkman script on lined paper, she initiated a discussion of “current events.” What did we think of our young president, JFK? Did it really make sense to huddle under our wooden desks when we drilled for a nuclear attack? And what exhibits would we want to visit at the upcoming World’s Fair, hosted in our borough not far from where the Mets would play?

All of her questions were unexpected and provocative. And she seemed sincerely interested in our answers. When I raised my hand and offered a thought, the enchanting girl turned to look in my direction. It soon occurred to me that the playground would still be there at the end of the school day. And Mrs. Bernstein’s red ink on my assignments did not cross out my misshapen letters as Mrs. L.’s had, but rather made critical comments on my work. With her encouragement, my grades improved. Then we all took a standardized examination and I scored very high. The test result coupled with Mrs. Bernstein’s recommendation proved sufficient for me to change tracks. I learned early the danger of rigid predictions about one’s mind and its potential.

Groopman’ conclusions—about learning, expectations, and the absolutely vital role that teachers can play in shaping their students’ destiny—is confirmed in research. Indeed, when asked to nominate a natural mentor, many young people will name a special teacher. And the research makes clear that these men and women provide their students with the inspiration, confidence, and skills to pursue and achieve their dreams. Over the years, my colleagues and I have written about close-teacher student bonds, both in the classroom and in afterschool settings. In one study, we showed the importance of teacher-student relationships to middle school students and in another we demonstrated teachers’ instrumental role in supporting immigrant children’s engagement in school.

Can you trust the latest findings? It depends….