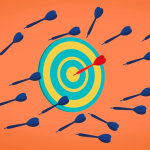 My friend Rick recently shared a graduation photo with his long-time mentee that conveyed so much love and pride I was moved to tears. Rick and Kevin were paired through a program that embraces the “friendship” model. Rather than take a focused, skills approach, Rick was tasked only with forging a close, enduring bond. Despite my respect for mentors like Rick, and my deep awareness of how such bonds can transform young lives, my faith in this friendship model is wavering.

I still believe that it is possible for particularly committed mentors to succeed simply by following their intuition. I also believe that intensive, enduring bonds can be enormously influential. The problem is that such bonds are not the norm. And, for youth who are struggling with academic, emotional, or behavioral difficulties, a short-term, light-touch, passive friendship approach is simply not enough. More than a decade of meta- and cost-benefit analyses have spoken–and tell us that this model is not yielding sufficiently promising dividends.

Part of the problem is that nearly 40% of relationships terminate early, often because mentors feel overwhelmed and ill-equipped. This rate is even higher when youth are struggling with difficulties (see below). Today’s youth need more than an ephemeral friendship and today’s volunteers crave clear directions and a sense that, however modest, they are making some difference. Shooting for the moon is not a wise investment strategy, particularly when there are limited reserves of volunteers and funding. 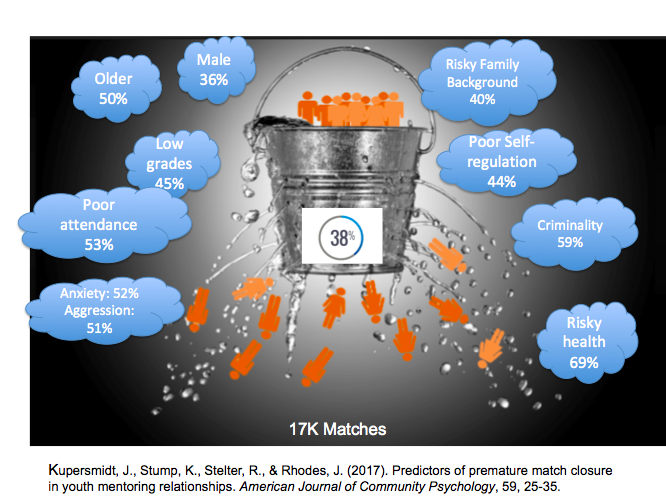 Depending on their needs and circumstances, youth can be taught valuable strategies for managing stress, regulating their emotions, building and maintaining relationships, applying for college or jobs, recruiting natural mentors etc. In a meta-analysis of 28 studies of school-based interventions with elementary-aged students designed to promote social-emotional competence, studies were coded as using active (e.g., role playing, skills) or passive (e.g., conversation, instruction) approaches (January et al., 2011).  Programs with active instructional modalities showed a significantly greater effect size (.37) than programs that used more passive methods (.12). The same holds true in child therapy (Weisz et al. (2005) where usual care “in which therapists were able to use their clinical judgment to deliver treatment as they saw fit, not constrained by evidence-based interventions or manuals” had no effect while effects in studies of structured, skills-based treatments for youth were in the medium to large range.

But, rather than shoulder all of the burden of training volunteers to deliver skills-based approaches, a more promising direction may be for mentoring programs to form partnerships with successful interventions, such as social emotional learning (SEL), dropout or recidivism prevention, or other evidence-based programs. After screening, training, and calibrating volunteers’  commitment and expertise, programs could dispatch mentors to settings that are delivering evidence-based programs. In some cases, the mentors could be trained to help deliver core components, as there is ample evidence that well-trained para-professionals can be as effective as professionals (Durlak, 1974; Conley et al., 2017). More commonly, however, volunteers could provide a context for reinforcing and practicing skills and behaviors that youth are learning through their involvement in an ongoing, effective intervention. In this “embedded mentoring” approach, volunteers build relationships in a more purposeful way to  practice and consolidate the evidence-based skills that their mentees are learning in the context of a broader, evidence-based intervention.

Helping youth practice, learn, and apply new skills may seem like a relatively narrow role, but not when you consider the strikingly larger effect sizes it can produce. Skills-training programs that included a supervised practice component have been found to be  dramatically more effective overall (mean effect size .45) compared to skill training programs without supervised practice (.11) or to other non-skill programs (i.e., information only) programs (.13) (Conley et al., 2015). Mentors can be particularly helpful to programs that are crunched for time and have a lot of material to cover, providing youth with personalized opportunities to practice skills over time . Rather than continuously pile on new skills, programs can enlist mentors to practice and consolidate what has been learned, increasing motivation, engagement, mastery, and retention (Elliott et al 2015).

As Conley and et al. (2015) note, despite the importance of supervised practice, this “critical feature” is often missing from youth interventions. So much time is devoted to teaching the skills, that there is often little, if any, time left for students to practice. At best, they observed, “only a small part of each session consisted of supervised practice and there was no indication that participants practiced the same skill in later sessions or that students had any opportunities to practice how to combine or integrate separate skills.” (p. 489). Mentors have a crucial role to play in this regard–dramatically improving the effects of evidence-based programs by providing a context for supervised practice.