Efforts and courage are not enough without purpose and direction.

Although most youth interventions are developed in response to particular needs or goals, mentoring programs were conceived more broadly as an extension of informal helping relationships. For nearly a century, most volunteer mentors were tasked simply with building friendships with disadvantaged youth. Many programs still adhere to this template, and their volunteers are tasked with being genuinely responsive and open to the needs and interests of their mentees.

This “friendship model” is gradually ceding ground to more focused, skills-based programming that is aligned with the broader field of prevention science (Cavell & Ellridge, 2015). Some programs even take a quasi-therapeutic approach, in which paraprofessionals or trained mentors help youth with early-stage mental health, behavioral, or other difficulties. This shift is consistent with the field of psychotherapy, which has moved from more open-ended, intuitive, relational approaches to cognitive-behavioral and other more active forms of treatment. But in the absence of a clearly articulated strategy, our goal of defining the purpose and direction of mentoring remains complicated.

One way to the clarify things is to consider the designations established for public health interventions (Gordon, 1983). 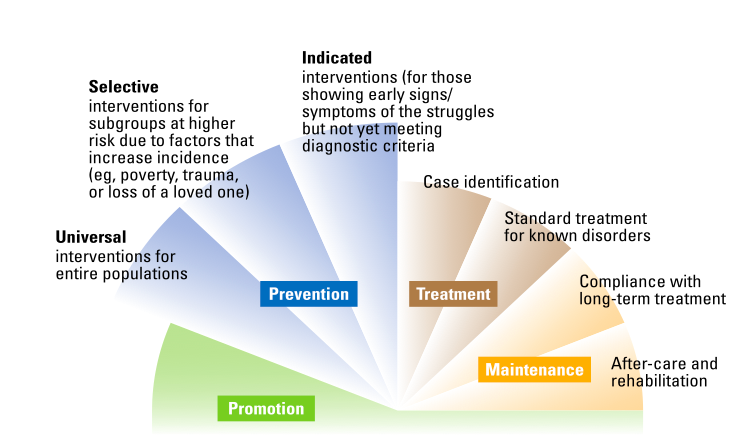 The designations include: universal primary preventive approaches that reach many youth (e.g., recreational and arts programs); selective prevention approaches that target those who are at risk for possible poor outcomes due to such stressors as living in poverty or having an incarcerated parent; indicated prevention approaches for youth who are already showing early symptoms of emotional, behavioral, and academic difficulties; and approaches that involve the treatment of clinical-level problems such as depression or anxiety. Within this framework, youth mentoring programs are typically considered universal “primary prevention” interventions, which serve all youth rather than just those who are at risk or already struggling. Universal primary prevention programs are thought to promote positive outcomes and yield down-the-road reductions in problems; essentially the youth services equivalent of putting fluoride in the public water supply.

Classifying mentoring programs as universal prevention interventions may be misguided. Indeed, many youths who enter mentoring programs are already experiencing marginalization and relatively high levels of risk and difficulty. For example, a 2018 evaluation of 2,165 American youths participating in thirty nationally representative mentoring programs found that nearly 70% of mentees were from marginalized, non-majority racial backgrounds. The vast majority (85%) of the mentees’ parents reported that their children had recently been exposed to family stress (such as a family member struggling with substance use, frequent family arguments, or homelessness), while more than three quarters (76%) noted that their child faced economic adversity and safety concerns (such as housing insecurity, parental job instability or gangs or drugs in the neighborhood) with participating families’ median annual income ranging from $20,000 to $30,000. Compared to young people on average nationally, mentees were roughly twice as likely to be living in extreme poverty, in a single-parent household, and to have an incarcerated parent or family member. Not surprisingly, given these life circumstances, many mentees were already struggling with relatively serious academic, social, and emotional difficulties. At intake, more than half of parents (52%) reported that their child was struggling academically (e.g., failing or at risk of failing two or more classes/subjects in school, or missing school three or more times a month) and more than half (52%) also said that their child was having significant issues with peers (e.g., being bullied or not having any close friends). Nearly half the parents (46%) also reported that their children had mental health concerns (e.g., frequent sadness, being under the care of a mental health care provider). Roughly one in five parents (19%) reported that their child had exhibited problematic behavior (e.g., suspensions, substance use, arrest/pick-up/contact with police). These rates are dramatically higher than national averages, which was particularly alarming given that the average mentee was approximately twelve years old. Finally, the referred youth were more than twice as likely than the average youth to be suffering from a mental health problem such as depression or anxiety, and three times more likely to have ADHD (see our summary of Jarjoura, G. R., Tanyu, M., Herrera, C., & Keller, T. E., 2018).

The distinctions among youth risk categories enable programs to set boundaries around their service models, to better target recruitment efforts, and to draw on evidence-based practices that are specific to the goals and populations they are serving. They also lead to a better calibration of the skills and experiences of volunteers with youths’ needs. But, because many mentoring programs have not historically drawn such distinction, they have sometimes struggled to match the needs of the mentees with the competencies and experiences of the volunteers.

Well-intentioned volunteers with little or no previous experience are best placed in universal or selective prevention programs whereas more seasoned mentors are best reserved for selective or indicated programs or approaches. Indeed, one of the most robust findings to have emerged from the youth mentoring literature over the past 20 years is that volunteers with experiences in the helping professions tend to be more committed and effective. Regrettably, seasoned volunteers are often placed with youth who are at lower risk, while everyday volunteers are sometimes thrown into the deep end with youth who are struggling with emotional, behavioral, or other difficulties. As I discussed in my previous column, this leads to high rates of early terminations.

In addition to better placement of volunteers, this framework enables us to more effectively place youth into programs that will address their needs. Youth who are already experiencing symptoms may need more than a typical mentoring program has to offer, and may be better served by an indicated (i.e., quasi-treatment) program or even more intensive professional treatment. Indeed, youth mentoring program evaluations suggest that mentoring is not as effective (DuBois, Holloway, Valentine, & Cooper, 2002), enduring (Raposa, Kupersmidt), or satisfying (Herrera et al., 2003) among youth who demonstrate more serious individual risk factors (such as academic, behavioral, or relationship difficulties).

With a more purposeful calibration and clearer direction, we can better harness the efforts and courage of our volunteer mentors.

Every other week a newsletter is sent out containing a new article written by Dr. Jean Rhodes, as well as other important articles related to mentoring. Sign up for our newsletter by visiting our website at the link below. #youthmentoring #research evidencebasedmentoring.org/su… pic.twitter.com/DMfgIVn7nW

Although there is limited research on instrumental mentoring, it still serves as a promising approach to mentor young adults. This study explores how relational closeness & goal-focused activities impact relationship quality for young people. evidencebasedmentoring.org/ne… pic.twitter.com/9UCdIzSVHb

Although the positive development of high-achieving youth of color is tied to cultural strengths, little is known about how they predict positive youth development. This study examines the roles cultural strengths have, according to the 5 C’s of PYD. evidencebasedmentoring.org/wa… pic.twitter.com/M4gmaptI5R